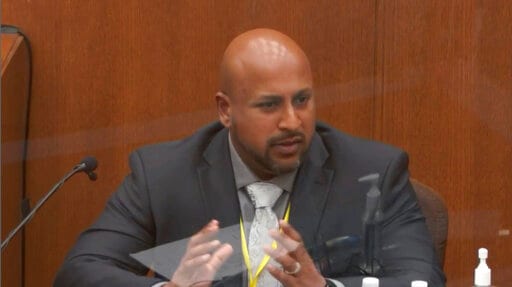 MINNEAPOLIS: Jurors in the trial of a Minneapolis police officer charged in George Floyds death are hearing from investigators from the Minnesota Bureau of Criminal Apprehension, an agency that could be viewed as the states equivalent of the FBI.

The BCA has come under fire for its investigations of other police-involved deaths, especially the case of a Minneapolis officer who shot and killed an unarmed Australian woman in 2017. It has kept a lower public profile while leading the investigation into the roles of Derek Chauvin and three other fired officers in Floyd’s death last May. Senior Special Agent James Reyerson testified Wednesday about his role as lead investigator.

Readers of the best-selling John Sandford detective novels know the BCA as the employer of the protagonists, Lucas Davenport and Virgil Flowers.

WHAT IS THE BCA?

The Bureau of Criminal Apprehension is a statewide agency that provides investigative and other services to help solve crimes, often to back up smaller law enforcement agencies that lack sufficient resources. The BCA also provides laboratory, training and criminal record services. It has more than 300 agents, analysts, scientists and other staff at its headquarters and lab in St. Paul and offices around the state. Many states have something similar.

The BCA has been led by Superintendent Drew Evans since 2015. The bureau is part of the larger Department of Public Safety, run by Commissioner John Harrington, who’s one of the top Black law enforcement officials in Minnesota.

A police accountability package enacted last year in response to Floyd’s death requires all law enforcement agencies to report to the BCA any use-of-force incidents that result in serious injury or death.

CRITICISM IN THE NOOR CASE

Police watchdogs had long seen BCA as being part of the blue wall of silence, but the bureau came under some of its heaviest criticism during the investigation of former Minneapolis Officer Mohamed Noor. In 2017, Noor fatally shot an unarmed Australian woman, Justine Ruszczyk Damond, who had called 911 to report a possible sexual assault.

Hennepin County Attorney Mike Freeman told activists that he hadn’t been able to charge Noor because agents weren’t doing their jobs. Damonds father, John Ruszczyk, called the BCAs early work either active resistance or gross incompetence. The BCA pushed back against Freeman’s comments but put new agents on the case, and Freeman said they did exemplary work. Following Noor’s conviction on murder and manslaughter charges in 2019, Freeman said his rift with the bureau had healed.

THE AGENCY’S ROLE IN THE CHAUVIN CASE

The BCA also led the investigation into Floyd’s death, but the county attorney’s office has taken a back seat. At the request of Gov. Tim Walz, Keith Ellison, the state’s first Black attorney general, took over the prosecution. So the BCA has been reporting its findings to the attorney general’s office.

Testimony in Chauvin’s trial has included frequent references to the BCA, which interviewed many witnesses, sometimes with the FBI, though Chauvin exercised his right to remain silent. Defense attorney Eric Nelson has been alert in highlighting discrepancies between witnesses’ testimony and their statements to the BCA.

Questions have been raised about how BCA investigators missed drugs when they first searched the SUV that Floyd was driving and the squad car that officers attempted to put him in on the night of the fatal confrontation. Second searches of the vehicles in December and January turned up pills containing a combination of methamphetamine and fentanyl.

Disclaimer: This post has been auto-published from an agency feed without any modifications to the text and has not been reviewed by an editor

China, Russia will give tough competition to the US in space, its own space station is going to launch separately from ISS

US Lawmakers Express Concern Over Covid-19 Situation in India, Appeal for Help

West Bengal Election 2021: Fourth phase of voting today, votes will be cast in...