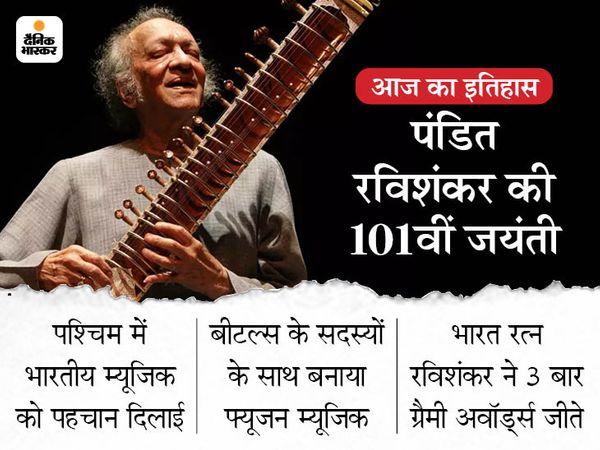 Sitar player Pandit Ravi Shankar, who gave Indian classical music a new dimension of popularity all over the world, was born in 1920 in Benares on this day. Ravi Shankar, the youngest of 7 brothers, had an interest in music since childhood. Ravi Shankar is one of the few musicians in India who have been very popular in the West. Panditji was part of his brother’s dance group since the age of 10. Initially, he leaned on dance. But at the age of 18, he started learning sitar and for this he took initiation from Ustad Alauddin Khan of Maihar.

Controversial married life
Pandit Ravi Shankar’s marital life was surrounded by controversies. He was first married in 1941 to Annapurna, daughter of Guru Alauddin Khan. He was separated from Annapurna after the birth of a son. Then he came in contact with the dancer Kamala Devi. After breaking up with Kamala Devi, he came in contact with Sukanya Rajan from whom she was born a daughter, Anushka Shankar. In the late 1980s he was married to Sue Jones, who in 1989 was born to daughter Norah Jones, who is a famous singer in America today.

Foreign music and sitar fusion
Pandit Ravi Shankar is known for making Indian music popular in Western countries. In 1966 he met George Harrison of the Beatles. Rock and Jazz music had its own passion at that time. Ravi Shankar caught his attention among the youth. He composed ‘Fusion’ music with renowned foreign musicians such as George Harrison, guitarist Jimmy Hendrix and violinist Yehudi Menuhin.

Last performance on stage
Pandit Ravi Shankar loved music so much that he could not stop himself from coming on stage despite his poor health. On 4 November 2012, she performed for the last time with her daughter Anushka in California. He was so ill before the presentation that he had to wear an oxygen mask. This program had been postponed 3 times earlier due to his poor health. Apart from all the awards in India and abroad, he has also received Grammy Awards thrice. He has also been awarded the highest civilian award Bharat Ratna in India. He was also a nominated member of the Rajya Sabha from 1986 to 1992. He died on December 12, 2012 in a hospital in San Diego, USA.

Establishment of the World Health Organization

The World Health Organization (WHO) was also established on 7 April 1948. The whole world celebrates this day as World Health Day. The WHO’s main task is to monitor health problems around the world and help member countries solve them. Every year World Health Day is celebrated with different themes. This time the theme is – Building a fairer, healthier world means building a proper and healthy world.

Other important events in the country and the world on April 7 are as follows:

Oxygen shortage in the Corona period: Supreme Court will hear today, the court has asked for a national plan on 4 issues

Lalu Prasad Yadav gets bail, free to walk out of jail