Police entered the house after three hours. The wife and daughter-in-law breathed peace after gaining independence from the freak SDO.

In Rewa, Madhya Pradesh, the cynical SDO took his own daughter-in-law hostage with a gun. Not only this, after 3 days on the daughter’s phone, she also fired on Samadhi, who reached the ransom, in which a bullet hit his leg. Even after the police arrived, he kept firing on alert, giving warning. Eventually, the police rescued the daughter-in-law and wife from her capture by confusing things.

If you do not run away, I will shoot you
SDO Suresh Mishra posted at Dindori resides with his wife and daughter-in-law in Nehru Nagar, located in the same police station, while the son lives in Bhopal. It is being told that the SDO had held the daughter-in-law hostage for the last 3 days. The scared daughter informed her father Srinivas Tiwari (68) about the incident over phone. Three days later, Srinivas reached his daughter-in-law on Thursday afternoon at 12 noon. He pleaded with Samadhi Suresh Mishra to leave the daughter, but the SDO did not listen. On the contrary, he said with a warning tone, “Run away from my house, otherwise I will shoot you.”

When Srinivas did not leave, an angry SDO opened fire on him. He fired at them 3 times. A bullet hit Srinivas’s leg and he succumbed to his injuries. Spanning long enough, Srinivas was admitted to Sanjay Gandhi Hospital by some relatives. 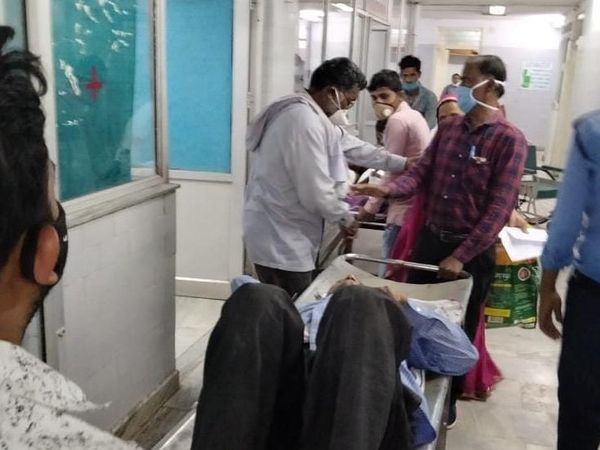 The injured Srinivas Tiwari was admitted to the hospital after being shot.

Firing of policemen also
After the firing incident, the police team who reached the spot tried to convince the SDO a lot. When some policemen started going inside the house, the SDO also opened fire on them. However, the policemen were not harmed. Police informed the district administration about the incident. The tehsildar also announced on the spot, but did not consider the SDO. The police kept announcing the release of the daughter-in-law from the accused for 3 hours.

The police felt that he had shot the daughter-in-law. After this, the Bichhiya police station in-charge Jagdish Singh Thakur, constable RD Patel and constable Binnu broke the lock of the main gate with courage. They caught the SDO by talking. Took the daughter-in-law and the wife of the accused out of the house. The accused SDO is arrested and sent to Sanjay Gandhi Hospital for medical test.