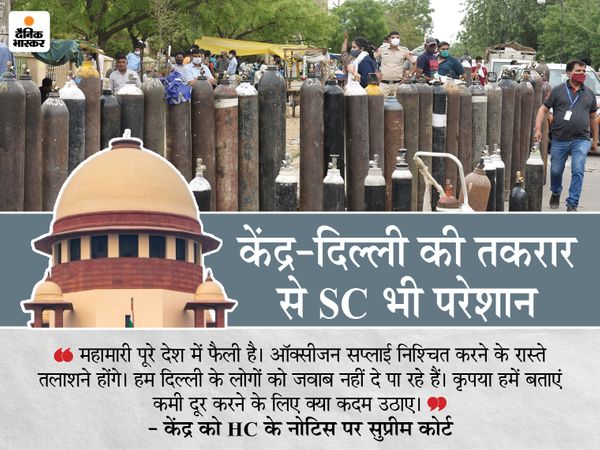 The Supreme Court has told the Center that some people have lost their lives due to lack of oxygen, there is no doubt about it.

The Center has moved the Supreme Court against the High Court’s notice to the central officers who are looking after the supply of oxygen in Delhi. An immediate hearing was started in the Supreme Court on Wednesday on the Centre’s appeal. The Supreme Court considered that sending the officers of the Center to jail or dragging them in a contempt case will not get oxygen. The court asked the Center what is the solution to the problem?

On behalf of the Center, Solicitor General Tushar Mehta told the Supreme Court that the Center and its officers are trying their best in the matter. In such a situation, it is unfortunate to start the process of contempt by the Delhi High Court. The Supreme Court said that due to lack of oxygen, lives have been lost and there is no doubt about it.

A contempt notice was sent by the Delhi High Court to the Center and its officers for not following the instructions given for the supply of oxygen for the treatment of Kovid patients in Delhi. The court also directed the officers to remain present in the court.

When the Center reached the Supreme Court against it, Justice DY Chandrachud and Justice MR Shah said that you are just running from one place to another. Please tell us about the demand and supply of oxygen. What steps were taken to solve this problem? The epidemic has spread across the country. We have to find ways to determine oxygen supply. We are unable to reply to the people of Delhi.