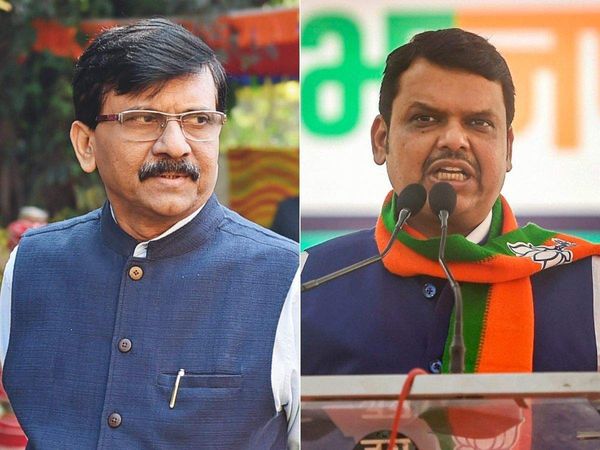 In the recovery case of Rs 100 crore, a new twist has come after the letter of former API Sachin Vazh. He has also accused former Home Minister Anil Deshmukh, senior Shiv Sena leader and Anil Parab, a minister in the Maharashtra government, for pressurizing him for recovery.

After Vazhe’s new revelations, Maharashtra’s politics has become hot again. BJP has now come forward and is also asking for the resignation of CM along with Anil Parab. Vazhe had said in a written statement on Saturday that Anil Deshmukh and Anil Parab had given him the target of recovery.

Fadnavis said – the image of the state and police has deteriorated
Former Chief Minister Devendra Fadnavis said on Thursday that Sachin Vazh’s letter is very serious. In this case there should be milk of milk and water of milk. What is happening in Maharashtra is not good for the image of the state and the police. The CBI is investigating in this case. We hope that the truth of this will be known to all soon.

Sanjay Raut said – Never has such dirty politics happened in the country
Defending his party leader and minister Anil Parab, Shiv Sena MP Sanjay Raut said- ‘I have known Parab for many years, he or any Shiv Sainik cannot lie in the name of Balasaheb Thackeray.’

Raut accused the opposition of doing dirty politics and said that such politics has never happened in the history of the country. However, the opposition’s maneuver to implicate the Maharashtra government in this manner will not succeed. Sanjay Raut said that not even one child of the Thackeray government will fall.

‘I have no saint or mahatma’
Raut said that a new trend has been started to discredit people in jail by writing letters to them. The man who accused Anil Parab is currently in NIA custody. The BJP should clarify that there is no saint or Mahatma writing the letter. Further Raut said that there are other people in the jail who can write letters, this should be kept in mind.

Javadekar said – Major recovery Aghadi government in the state
In this case, Union Minister Prakash Javadekar said that in the last 30 days, there is a lot of upheaval in Maharashtra. One thing has become clear that it is called ‘Maha Vikas Aghadi’, but it is ‘Maha Vikas Aghadi’. Collect money through police, loot and recover. This is the only program of the Government of Maharashtra. If Sachin does not tell me the truth, Shiv Sena people were supporting him even after going to jail.

Parab swore off daughters, calling the allegations false
After allegations of wazhe, Minister Anil Parab said that I swear on my daughters, I swear on Balasaheb, all the allegations against me are false. This is an attempt to discredit me. The JBJP leaders had been shouting for two-three days. He was referring to another victim. He was already aware of this matter. The BJP already knew that Sachin was going to give me the letter, so he was talking about ‘take the third wicket’.

He said that I have no acquaintance with the municipal contractor. That is why I am ready to face any inquiry. Parab said why did Sachin Vaz not take my name first? This proves that he wants to discredit the government. I am willing to undergo any investigation and narco test in this matter.

Replacing your old Android phone with a new one? Here’s a checklist of top...