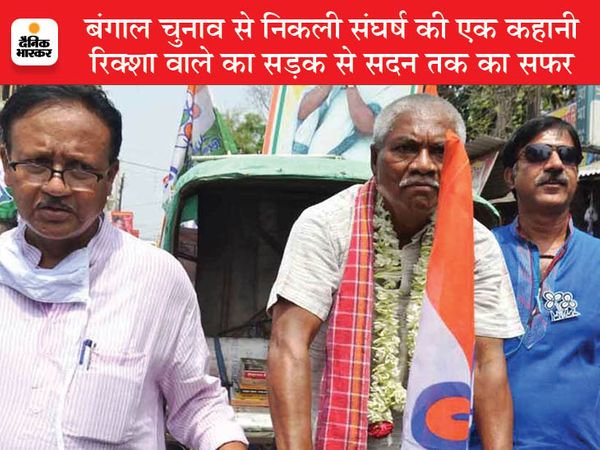 After the partition of the country, at the age of six, a child reaches a refugee camp in Bengal. Childhood was so difficult that one had to work in tea shops, had to work as a laborer. If this child is a little older then he becomes a part of the then Naxalbari movement of Bengal. Remains in prison for a long time, but is disillusioned from there as well. Then hands start rickshaw in front of Jadavpur University.

All these old things happened. The latest information is that the boy, who hails a rickshaw named Manoranjan Merchant, has won the Trinamool Congress ticket and has become an MLA. There is a lot of hope that she will also be made a minister in Mamta’s coming government. From the rickshaw to the honorable MLA, the life of the entertainment trader’s life is now well known. 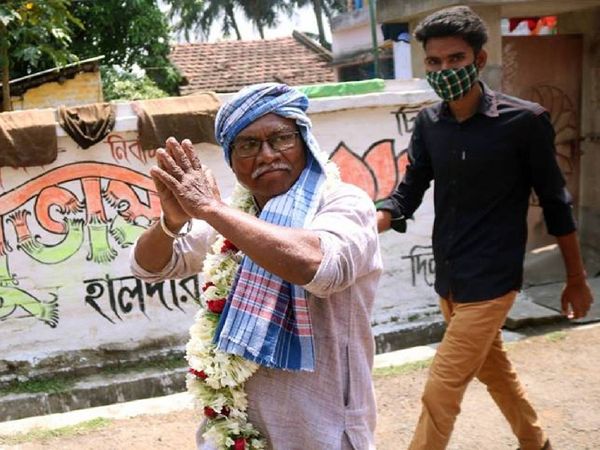 Entertainment trader during election campaign on Balagad seat of Hooghly. Manoranjan came to West Bengal at the age of six after the partition of the country and started his life from a refugee camp in Bankura. Photo- Sanjay

I saw the sister dying of hunger in front of her eyes.
Nearly six years after the partition of the country, in 1953, Manoranjan, along with his family, had moved from Barisal (now in Bangladesh) in erstwhile East Pakistan to a refugee camp in Bankura, West Bengal. A few days later, those people were instructed to go to Dandakaranya, but Manoranjan’s father refused to go there. An endless series of conflicts began after that. Manoranjan started working at the tea shop at an early age.

Manoranjan says that he saw the elder sister dying of hunger in front of her eyes. After that, going to cities like Darjeeling, Jalpaiguri, Guwahati, Lucknow and Benaras, they did begari, but Rama returned to Kolkata. He was also associated with the Naxalite movement in West Bengal in the sixties. Had to spend 26 months in jail. But he was disillusioned with the working style of the Naxalite leaders. After coming out of jail, he started driving a rickshaw in front of Kolkata’s Jadavpur railway station. 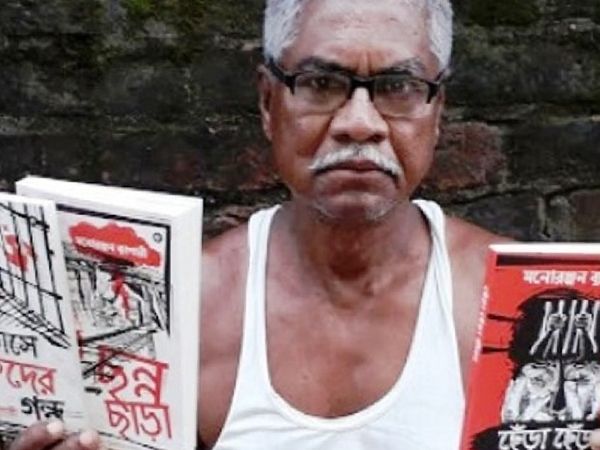 Entertainment is a well-known name in Bengali literature writing. He says that while meeting a rickshaw in Kolkata, he met Mahasweta Devi, a great Bengali writer. He is the one who inspired me to write. Photo- Sanjay

Writer became after meeting famous litterateur Mahasweta Devi
It was while driving a rickshaw that one day a woman was met by a ride and the direction of her life changed. She was a well-known writer Mahasweta Devi who fought for the rights of tribals. Amusement, mustering up, asked the lady traveler the meaning of the word Jijivisha. This shocked the woman. Not only did he explain the meaning of the word, he also turned the pages of the past of the rickshaw.
Mahasweta asked the rickshaw man to write the story of his life and struggle so far in his magazine Baartika and also told him his address. The year was 1981. Entertainment says, ‘That meeting with Mahashweta Devi changed the course of my life. Had I not met and talked to him, I would have probably been driving a rickshaw till now. ‘

Dozens of books have been published
After the publication of Mahashweta Devi’s magazine, gradually her articles started appearing in many Bengali magazines and magazines, and the whole of Bengal started recognizing her. A prisoner and jailer also inspired reading and writing during his stay in jail during the Naxalite movement. Manranjan’s writing had started from Alipur Jail, but after meeting Mahashweta, entertainment became a literary writer.

After all, how did the idea to ask Mahashweta Devi mean Jijivisha? To this question Manoranjan says, ‘I thought she would be a professor. Therefore, I gathered courage and asked. Mahashweta Devi has such a profound effect on the life of entertainment that she has also named her daughter as Mahashweta.

His journey started as a writer-litterateur in the year 1981, has now achieved many heights. During this time, dozens of books including his autobiography have been published, dozens of awards have also been received. Many of his books have also been translated into English. In the books of entertainment, the struggle of Dalit class Naxal movement is mentioned in detail. 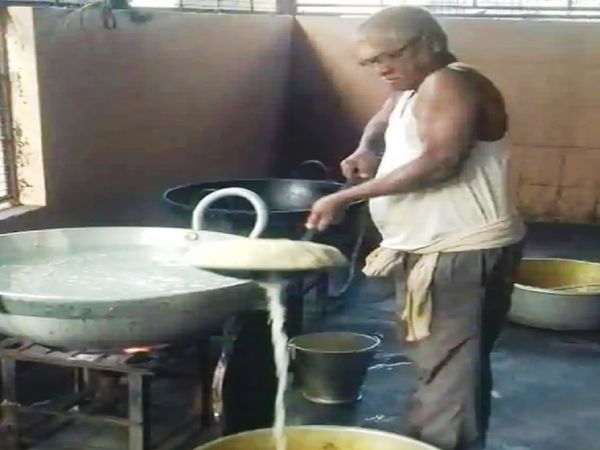 Manoranjan used to cook food for children in a government school in Bengal till last year. At his request, Mamta transferred him to the library and he was also made the president of the Dalit Academy. Photo- Sanjay

No one was surprised by Mamta’s decision to give tickets
Manoranjan says, ‘In the circumstances where my childhood was spent, I did not even imagine reaching here. Especially during the last one year my life has changed completely. Writing books, cooking food for children in a government school and taking time out of it, writing books was my daily routine. Now I am satisfied that as an MLA, I will be able to return something to the society that has given me so much. Now I will be able to do something especially for the Dalits and backward sections so that no one else has to face all that I had to face. ‘

When Mamata Banerjee released the list of candidates for the Trinamool Congress, no one was particularly surprised to see the name of entertainment in it. There was also a reason for this. Mamta Banerjee removed him from the cooking work last year and appointed him in the library. After that, the new Dalit Academy formed by the government, he was also made the president.

Form filled by going on rickshaw, publicity on rickshaw itself
Entertainment has not forgotten its past in spite of traveling to power by road. He filed his nomination papers only after going on a rickshaw and did most of the election campaign on the rickshaw itself. The slogan of his supporters was during the election campaign – a rickshawala will now reach the assembly. He is always wearing a ring in his hands, on which the word Jijivisha is written. About this, he explains, ‘Once I asked the great Bangla writer Mahashweta Devi what it meant. The amazing way in which he explained its meaning, he reincarnated me as a writer. ‘

Why were you driving a rickshaw while campaigning or filing nomination papers? On this question, Entertainment says, “Diesel and petrol prices are skyrocketing in the country. I chose the rickshaw to protest against this. Rickshaws have been an integral part of my life. How can I forget this? ‘

The entertainer, who has become the face and voice of Dalits in West Bengal, used to constantly say during his election campaign, ‘I too am a normal person like you. I have spent countless nights sleeping on the railway platform due to the lack of a roof over my head. 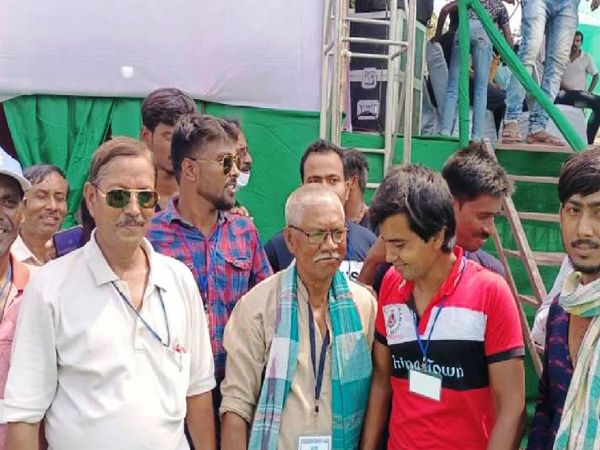 The entertainers come from the Namasudra community. The BJP was trying to woo Namasudra voters through the CAA in this election as a large Namasudra population is yet to get permanent citizenship. Mamta gave tickets to popular entertainment in this category for the BJP’s cut.

Entertainment is of Namasudra caste, BJP was trying to woo this class
Actually, the entertainers belong to the Namasudra caste, which is considered a Dalit. Most of the people of this community have come from Bangladesh and have not yet got permanent citizenship. The BJP had sought to woo the community with polarization and politics of caste identity that it would be granted citizenship through the CAA. It was only because of this cut that Mamta decided to field entertainment. There are a good number of voters from the Dalit class in Balagarh assembly constituency. They were all supported by entertainment and reached the assembly.

Cooking entertainers for students at a silent deaf school in south Kolkata since the year 1997 say, “It was difficult to stand and cook due to increasing age, knee pain and operation.” So I sent a letter to Mamta Didi last year requesting my transfer. Mamta immediately took cognizance and transferred it to the library. After that, when Mamata announced the formation of the Dalit Academy at the end of last year, Manoranjan was appointed its president.

Entertainment is currently busy with Mamta Didi’s oath program. Regarding his priority, he says that I have been working for the weaker sections, I will do so further. Apart from this, large scale opposition to laws like NRC and CAA is necessary in the state. If this does not happen, the government will send detention centers to all the people who came from across the border decades ago on the lines of Assam.

Sidharth Malhotra injured on the set of Mission Majnu, shooting still not stopped