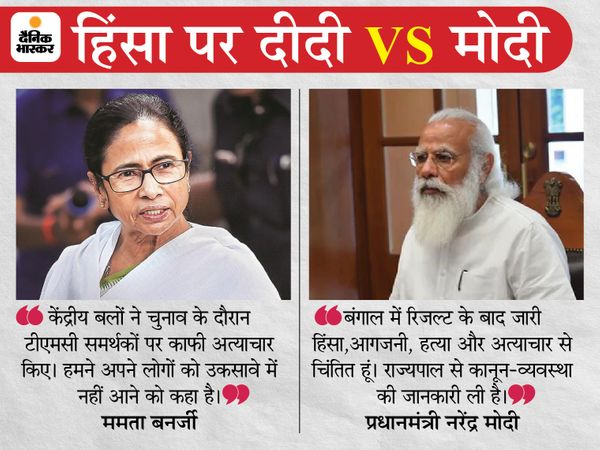 The phase of violence has resumed in West Bengal after the election results on 2 May. After the massive victory of Chief Minister Mamata Banerjee’s party TMC in the state, now the bloody game of revenge politics has started between the BJP and the workers of the ruling party. Till now there have been reports of violence from 6 districts and about 11 people have been killed in two days. Prime Minister Narendra Modi called Governor Jagdish Dhankhar and expressed concern over arson and killings in Bengal.

Governor Jagdish Dhankar said that he had a telephonic conversation with Prime Minister Narendra Modi on the current state of the state. He said that barbaric violence, arson, looting and murders continue unabated in the state after the election results. Restoring law and order in the state is very important.

Concerned must act in overdrive to restore order.

Mamta said – Central forces tortured our workers
West Bengal Chief Minister Banerjee appealed to everyone to maintain peace amidst reports of violence after winning a landslide victory. He alleged that central forces tortured TMC supporters a lot during the elections. He said that even after the results were declared, BJP attacked our supporters in some areas but we appealed to our people not to get into any provocation and instead asked the police to inform.

BJP accuses TMC of violence
The BJP blamed TMC for the ongoing violence in Bengal. BJP spokesperson Sambit Patra alleged that TMC goons had received the tacit consent of Chief Minister Mamata Banerjee for violence and violence. Many of their leaders are openly inciting their people for violence. Patra said that this is not a coincidence, but an experiment, sponsored. Mamta ji had given a speech before the election and said that the CRPF will go back after the election is over, then the time will be for TMC, we will also see. Today the whole of India and the world is watching what is happening in Bengal.

9 BJP workers killed
The BJP alleges that on May 2, on the day of counting, the shops of their supporters, activists have been looted in many areas including Nandigram, Kolkata, Asansol, Hooghly. The houses of BJP workers have been set on fire by the people of TMC. 9 of our activists have been killed. Not only this, women have also been raped after being removed from their homes.

At the same time, TMC also made similar accusations on BJP workers, saying that in many areas their workers have also been targeted and their offices have been ransacked, arson. BJP leader Rahul Sinha has demanded from the Governor and the Election Commission that the Chief Minister’s swearing in ceremony be stopped until the violence stops.

11 killed in violence since May 2
Incidents of violence have occurred in various parts from Sunday evening to Monday night. There are reports of 11 people killed in these incidents. The BJP alleges that it has nine of its workers. While a TMC in Bardhaman and an ISF worker in North 24 Parganas have lost their lives. The Trinamool Congress has been accused in these incidents.

Home Ministry asked for the report
The Union Home Ministry has sought a report from the Government of Bengal on the incidents of violence. The Governor has also summoned the DGP on the violence and arson and sought a report from the Home Secretary. At the same time, BJP state president Dilip Ghosh has submitted a memorandum to the Governor on Sunday evening regarding the post-election violence. The BJP has issued helpline numbers in all the divisions to assist its workers.

BJP leader Kailash Vijayvargiya said – attacks on BJP workers are being done on the instigation of Mamata Banerjee. Meanwhile, the party’s national president JP Nadda is visiting Bengal on Tuesday.

Oxford – Britain will not put those inside 40, a deadly clot formed from...

Big negligence in UP amid vaccination: 3 women replaced anti-rabies vaccine instead of corona,...