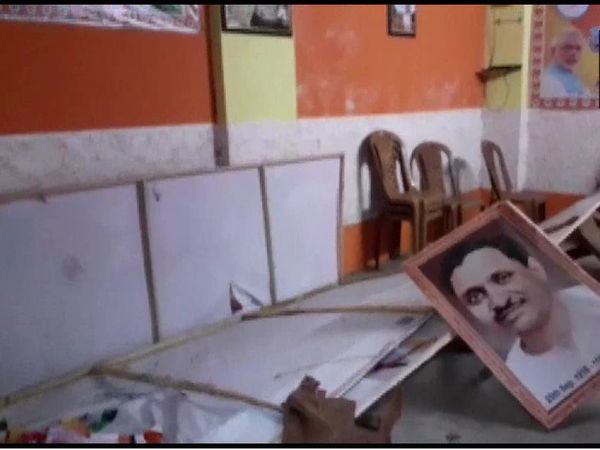 BJP office was vandalized at Bhatpada in North 24 Parganas district. TMC activists are accused of this.

After the results of the assembly elections in Bengal, a series of political violence started. The BJP office in Kolkata was set on fire on the result day itself. On Monday, there are reports of beating of two party workers. The Home Ministry has sought a report from the Bengal government on targeting opposition party workers. On the other hand, BJP leader Kailash Vijayvargiya said – This attack on BJP workers is being done under the guidance of Mamata Banerjee. The party’s national president JP Nadda is visiting Bengal on Tuesday.

BJP state president Dilip Ghosh claimed that 9 people died in 24 hours in the violence that started after the election. There is an atmosphere of fear in the state. The ruling party is sitting with folded hands. The police are not helping. We have met the Governor on this issue. He has given assurance of action.

BJP national spokesperson Sambit Patra posted a video of the attack on social media. In this, some people celebrating the victory are entering and demolishing a house.

How are these goons attacking green supporters !! pic.twitter.com/04EodB2opH

BJP workers will protest across the country with Kovid protocol
The BJP decided to oppose the attacks on its workers in West Bengal. The party said in a statement – On May 5, party workers will sit in every mandal to protest against this violence. During this time protocol related to Kovid-19 will be followed.

Attack on BJP office
In Bhatpada in North 24 Parganas district, the BJP office and some shops were attacked and vandalized by some people. During this time bombs were also thrown. One person said that TMC miscreants looted my shop. At least 10 bombs have been thrown here. There have also been reports of violence from Sitalkuchi in Cooch Behar. BJP office was vandalized in Nandigram. In Haldia, some miscreants beat up media persons on Sunday evening.

The governor sought answers from police officers
In view of the rising incidents of arson, looting and violence in the state, Governor Jagdeep Dhankar on Monday called the Director General of Police (DGP) and the Kolkata Police Commissioner to talk on the law and order situation. He said that the killings in the state are a sign of a dangerous situation after the results. Police officers have been asked to take all steps to restore the rule of law.

Elections postponed in three seats
The Mamata Banerjee-led Trinamool Congress won 213 seats in the election results on Sunday. BJP has got 77 seats. Elections to two seats in Murshidabad have been postponed due to the death of candidates from Corona. The Election Commission has also postponed elections to one seat in Odisha. This decision has been taken because of Corona.

5–6 days vaccine left with Delhi: Kejriwal said – we need 3 lakh vaccines daily; Provision of vaccine soon for those below 18...

Bihar’s Red Martyr: On seeing the dead body of the SHO, the mother felt...

India created a record by conducting vaccination campaign: Corona vaccine was given to so...