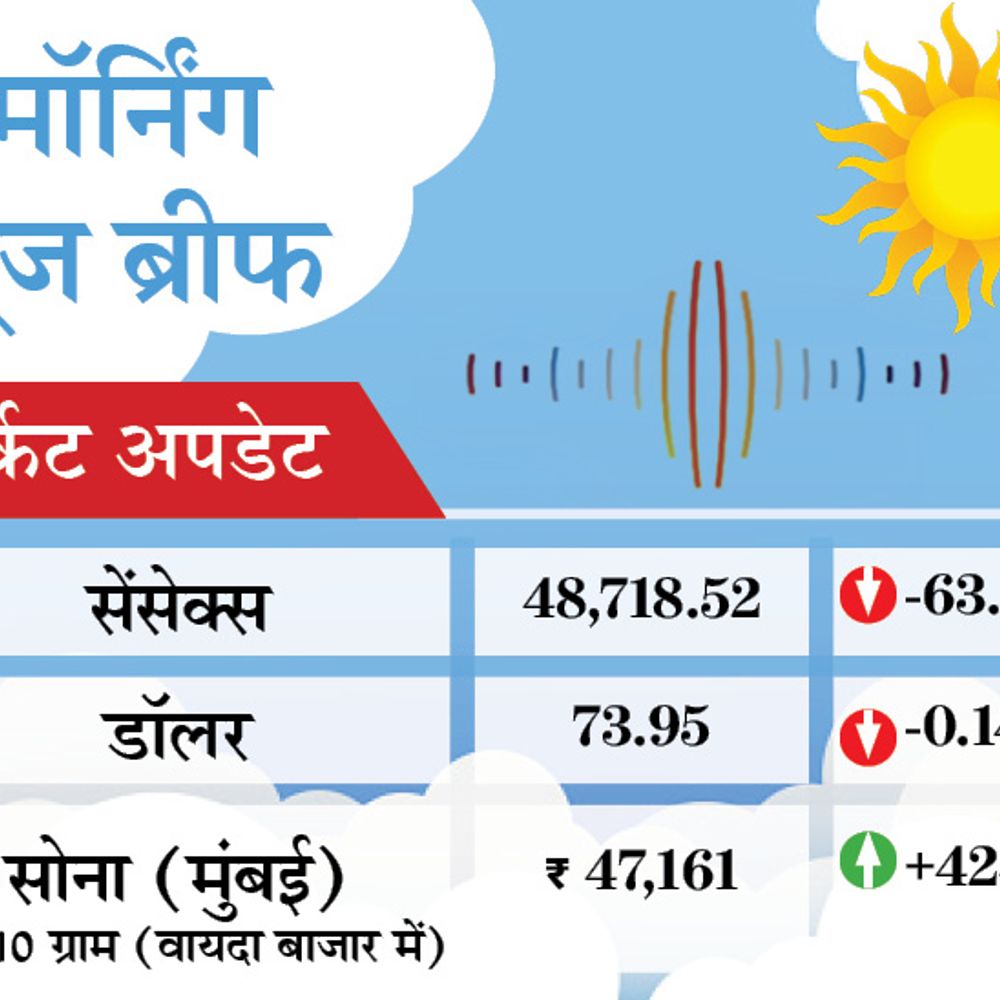 Hi!
What are the hurdles to form a new government in 5 states? What are the questions of Mamata Banerjee on the defeat of Nandigram? Who spread Corona in Mumbai? What is good news about the treatment of Corona? This morning, we have brought such special news for you. So let’s start the morning news brief…

First let’s see what the market is saying ..

Petition in Delhi High Court to stop IPL
The remaining matches of the Indian Premier League, the IPL, are under a cloud of crisis. On Monday, a petition was filed in the Delhi High Court seeking an order to cancel the remaining matches of the IPL. The petition has also demanded that notice be given to the Central, Delhi Government, Board and DDCA to give a response to the matter regarding the promotion of cricket and IPL more than public health.

Shadow of Corona on IPL 2021
Two Kolkata Knight Riders (KKR) players came positive on Monday. After this, Kolkata and Bengaluru had to postpone the match. There were only 29 matches in the tournament. There are 31 matches left, including the final. It will be in 4 cities Ahmedabad, Delhi, Bengaluru and Kolkata. The condition of Corona in the four cities is very frightening. More than 10 thousand infected are being found every day since April 15 in Bengaluru and April 21 in Kolkata. In the IPL, 7 players have been infected since inception.

Elections end in Bengal, violence begins
After the results of the assembly elections in Bengal, a series of political violence started. The BJP office in Kolkata was set on fire on the result day itself. On Monday, there are reports of beating of two party workers. The Ministry of Home Affairs has sought a report from the Government of Bengal on the violence. The party’s national president JP Nadda is visiting Bengal on Tuesday.

Mamta’s questions on Nandigram’s defeat
Mamta Banerjee, who has won the victory in Bengal, has questioned the results of Nandigram. Mamta said that there was a server down for 4 hours. The governor had congratulated us on the victory, but suddenly everything was changed. Mamta said that someone sent me a message. It was told that the returning officer of Nandigram was scared at the time of counting. Officers said that if they were counted again, they could be in danger of life.

Government will be formed this week in 5 states
Preparations for the formation of a new government in West Bengal, Tamil Nadu, Kerala, Assam and Puducherry have intensified. Mamta Banerjee will take oath of Chief Minister for the third time on 5 May in Bengal. MK Stalin will take oath on 7 May in Tamil Nadu. In Kerala, Chief Minister Pinarayi Vijayan met the Governor. Rangaswamy will become the Chief Minister for the second time in Puducherry. There is a doubt between CM Sarbananda Sonowal and Hemant Biswa Sarma in Assam.

Cloud burst in Uttarkashi
A cloudburst broke in Uttarkashi in Uttarakhand on Monday. This caused the canal water here to overflow and enter the houses. The walls of the houses were buried for several feet due to the mud that came with the water. In Narakota of Rudraprayag district, cloudburst also swept the mountains with water and entered the houses. The villagers saved lives by going to high places. Many areas of Tehri have also received heavy rains.

Local train spread corona in Mumbai
Amid growing cases of infection in Maharashtra, scientists at the Tata Institute of Fundamental Research (TIFR) in Mumbai have claimed that the virus infection speed in Mumbai may decrease by 1 June. According to the report, the highest number of deaths will be seen here in the first week of May and by June 1 it will be reduced and stabilized. burx, due to local train spread corona rapidly in mumbai.

NEET PG exam postponed due to Corona
Neet PG examination has been postponed for the next four months amid increasing cases of corona in the country. Now the MBBS final year students’ duty will be imposed for monitoring patients with mild symptoms of corona. At the same time, the services of BSc (Nursing) / GNN pass nurses will be taken for full-time nursing under the supervision of senior doctors.

Improvement in the state of infection in Chhattisgarh
In Chhattisgarh, the situation that has become serious due to corona infection is gradually improving. On Sunday, 42 thousand 32 tests were conducted in the state and 11 thousand 825 new infections were detected. With this figure, the state dropped out of the list of top 10 states with the highest number of newly infected patients daily to the 14th position.

Expander
Corona home test kit can be a game changer
The drug testing kit was approved at home by the US drug regulator – the Food and Drug Administration (US-FDA), in November 2020. In India also, more than three lakh new patients are coming every day for the last 10 days. That means the most in the whole world. Amid mounting data, the Kovid Task Force has recommended total lockdowns across the country. In such circumstances, this home test kit can prove to be a game changer for India.
Read full news

PM’s new palace amid epidemic
The country is currently facing an epidemic. Most states in the country have a lockdown, but construction continues in the Central Vista project. Under this, the Prime Minister’s new residence will be ready by December 2022. It is being prepared under the Central Vista Project. It is placed in the ‘Essential Services’ Act. Therefore, construction work has not been stopped here.

Poonawala’s clarification after threatening statement
Adar Poonawala, who has been accused of receiving threats in the country for the Corona vaccine, has clarified his statement. Poonawala, CEO of Serum Institute of India, said that his talk was misinterpreted. He said that the vaccine is produced through a special process, we cannot produce a large number of vaccines overnight.

Anil Ambani was walking on the golf ground in lockdown
Anil Ambani, one of the country’s biggest businessmen, is currently in Mahabaleshwar, Maharashtra. He had been walking for several days at a golf course here with wife Tina and two sons. After getting information about the case, the district administration has sealed the golf ground. Maharashtra is the most infection affected state in the country. Tighter restrictions remain in force till May 15. People cannot move from one city to another without proper reason.

Positive news
Agro tourism based farming earns millions
Two brothers from Delhi, Mrinal Dabbas and Lakshya Dabbas have been doing agro tourism based organic farming for the last 5 years. Mrinal has done engineering, while Laksh has done masters in environmental science. They are supplying products like fruits, vegetables, honey, pulses, flour across Delhi as well as across the country through a network of more than 200 farmers. With this, they are achieving a turnover of 70 lakh rupees every year.
Read full news ..

Drug molecule that eliminates corona
There is good news about coronavirus. IT company Tech Mahindra together with Reagene Biosciences has found a new drug molecule. There is a possibility that this drug may kill and kill the coronavirus. Now it is ready to be patented, so that further research can be done on it. Makers Lab Tech is the research and development arm of Mahindra.

Chatbot for the nearest vaccination center
Kovid vaccination of people between 18 and 45 years has started since May 1 in many states. It is necessary to register before vaccination, but those who are not able to register. They can get vaccinated through Aadhaar card. You can find the Vaccination Center near the house with the help of WhatsApp. WhatsApp has launched chatbot MyGov Corona Helpdesk. Click to know the complete process ..

Transgender helped in Corona among Mumbai
Transgender people are coming forward to help amid the horrifying scene of Corona in Mumbai. Here members associated with ‘Kinnar Maa Sanstha’ are working in different areas of Mumbai to provide ration to the needy people. Salma Khan, the president of the organization, says that after the second wave of Corona has come, she has reached ration for more than 80 thousand people so far. These people are also delivering masks and sanitizers to the people.

What’s more in the headlines…

Home delivery of liquor in Chhattisgarh: rupees, liquor not even received from accounts of...

Post-election violence in Bengal: clashes between BJP and Trinamool activists continue, 11 deaths in...