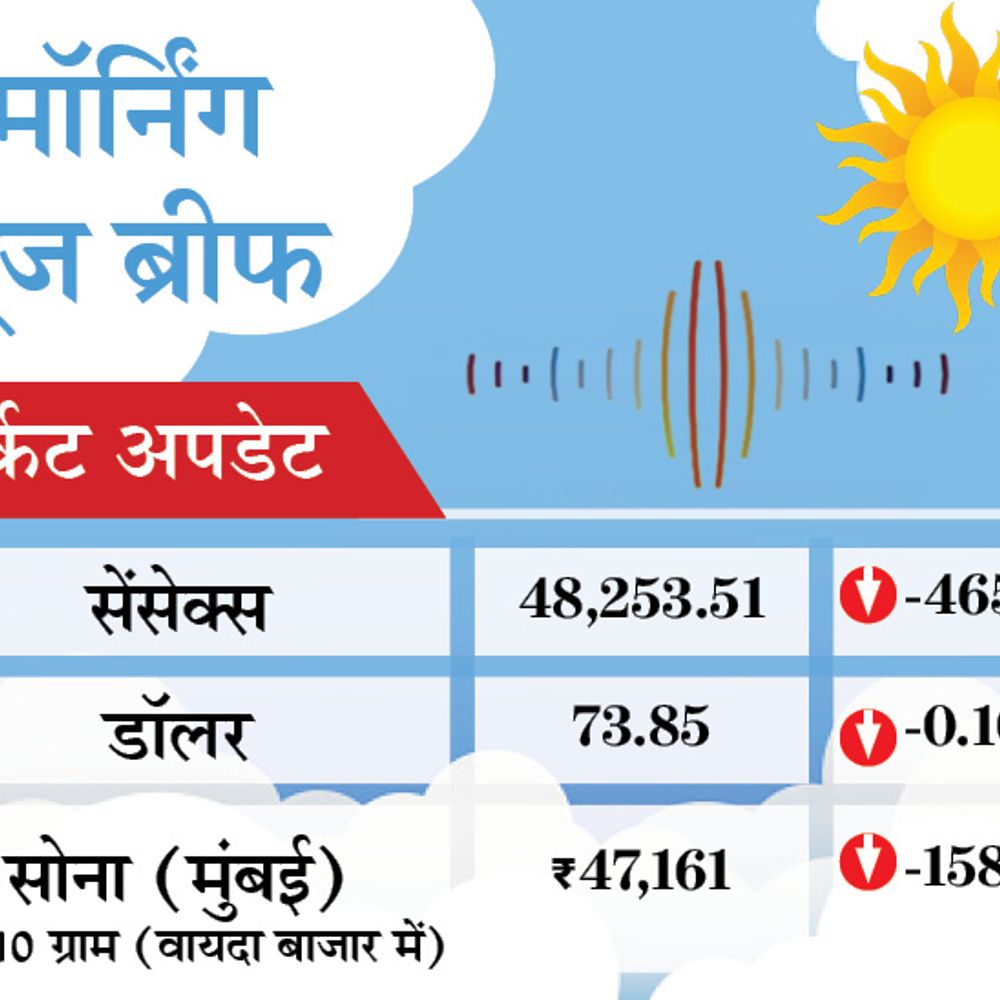 Hi!
Why did the High Court tell the Central Government that you are sitting in the sand like an ostrich? What is the big decision of the government on starting 5G service in the country and in which city of Zoo, for the first time, the Asian lion Corona got positive? This morning, we have brought such special news for you. So let’s start the morning news brief…

First let’s see what the market is saying ..

Home and abroad
Political violence in 6 districts of Bengal, 11 killed
Violent clashes between BJP and TMC activists have been taking place since the election results came out in West Bengal on 2 May. Till now there have been reports of violence from 6 districts. About 11 people were reported killed in two days. Prime Minister Narendra Modi has expressed concern over these incidents by calling Governor Jagdish Dhankhar. BJP spokesperson Gaurav Bhatia has filed a petition in the Supreme Court on this issue. Meanwhile, BJP National President JP Nadda reached Kolkata on Tuesday. They will stay in West Bengal for two days to review the areas of violence.

IPL finally banned after 29 matches
The 14th season of IPL has been postponed due to corona infection. BCCI Vice President Rajiv Shukla said that the tournament has been suspended. We will see if it can be completed further. The BCCI has taken this decision after four players from three teams, a coach and two other staff were infected in two days. KKR’s Varun Chakraborty, Sandeep Warrier, along with CSK’s bowling coach Laxmipathy Balaji, on Tuesday saw Riddhiman Saha of Sunrisers Hyderabad and Amit Mishra of Delhi Capitals also turn positive.

High court said – Center gives 700 metric tons of oxygen to Delhi
The High Court has severely reprimanded the Center over the oxygen crisis in Delhi. The Delhi High Court told the Center on Tuesday that you can sit like an ostrich by putting your head in the sand and not we. After this, a notice was issued to the Central Government asking why the contempt of court should not be pursued against Delhi for not complying with the order to supply oxygen to Delhi.
The High Court also rejected the plea of ​​the Center in which it said that 700 metric tonnes of oxygen cannot be given to Delhi with the existing infrastructure.

Deepika Padukone corona infected, father in hospital
Deepika Padukone has also been hit by corona infection. However, this news has not been confirmed by Deepika or her team. But according to reports, she had gone to Bangalore to meet her family in the past. Perhaps then she became infected. Earlier on Tuesday afternoon, news of his father and former National Badminton player Prakash Padukone getting infected and admitted to the hospital in Bangalore. Apart from Prakash, his wife Ujjala and daughter Anisha have also been found to be Corona positive.

8 lion corona positive for the first time in the country
For the first time in the country, the case of lions being corona positive has come to the fore. 8 Asian lions of Nehru Zoological Park (NZP) in Hyderabad have received the infection. According to the media report, this was told to the Zoo management only on 29 April. Employees working at Xu had noticed signs of corona in the lions on 24 April. The Center for Cellular and Molecular Biology (CCMB) reported that the RT-PCR report of 8 lions came back positive. There are a total of 12 Asiatic lions in this park. Among them, 4 males and 4 females are positive.

Expander
Is corona dangerous for asthma patients?
In the second wave of Corona virus, the statistics of infections and deaths are breaking their own previous records. Corona infection is a respiratory disease and four out of every 100 adults in India suffer from asthma. Due to environmental pollution, their number is increasing rapidly. In such a situation, the question arises that is asthma also the major reason behind the deaths from corona? On this World Asthma Day (May 5), we tried to know what is the relationship between Kovid-19 infection and asthma?

13 applications approved for 5G trials in the country
The central government has approved 13 applications for 5G trials in the country. According to a report, Chinese companies like Huawei and ZTE have been kept out of this. The telecom department had received a total of 16 applications for 5G trials. The state-run telecom company BSNL has partnered with the Center for Development of Telematics (C-DoT) for trials. Bharti Airtel, Vodafone-Idea and Reliance Jio have partnered with vendors of Ericsson and Nokia. These companies will be given airwaves of 700 MHz band.

Microsoft offers to buy Yahoo
Microsoft Corp has shown interest in buying Yahoo Inc, the world’s number one search engine ever. For this, an offer of 44.6 billion dollars (about 3.3 lakh crore rupees) has been made. Yahoo’s board is considering this offer. Microsoft has been continuously trying to buy this company since 2008. Microsoft has offered $ 31 in cash and stock per share in a letter to the Yahoo board. On the basis of this deal, both companies can pose a challenge for Google.

India and UK will double trade by 2030
India and Britain have agreed to double trade in 9 years. It was agreed on Wednesday at a virtual summit between the Prime Ministers of the two countries. During this time a roadmap for 2030 was also approved. After a summit with British Prime Minister Boris Johnson, Prime Minister Modi called it a success. Said to be a summit producer with my friend and the British Prime Minister Boris Johnson. We have approved an ambitious roadmap for 2030. This will strengthen the strategic partnership between the two countries.

Mamta called Tadka, Kangana’s Twitter account suspended
Twitter has suspended the account of actress Kangana Ranot. Twitter says Kangana has broken the rules. On Tuesday, the actress expressed displeasure over the violence in West Bengal. At the same time, the Central Government had demanded President’s rule in Bengal. She had also shared the photo of the woman leader of the BJP, claiming that TMC people had gangraped her. Kangana compared Mamata Banerjee to Tadka in a tweet, writing that she is a bloodthirsty demon Tadka. Those who voted for him, your hands are also covered with blood.

Bill-Milinda Gates divorce after 27 years of marriage
Microsoft founder Bill Gates and his wife Milinda Gates have announced a divorce after 27 years of marriage. They both have a son and two daughters. At present, the net worth of Bill Gates is $ 146 billion and about 10.87 lakh crore rupees. Bill Gates and Milinda first met in 1987. The two got married in 1994. In a joint statement released on social media, he said that after much deliberation and conversation, we have decided to end the relationship. They will continue to work together for their foundation.

Big shock for BJP in UP Panchayat elections
His party BJP is lagging behind in Prime Minister Narendra Modi’s parliamentary constituency Varanasi in Uttar Pradesh’s panchayat elections. Elections were held here on 39 of the 40 seats of Zilla Panchayat member. Elections were postponed due to the death of a candidate in one seat. So far, the results of 26 seats have been arrived. BJP has been able to win only 7 seats. At the same time, Samajwadi Party has captured 14 seats. Ayodhya is more or less the same. In Mathura, Mayawati’s party BSP has defeated the BJP.

Today’s positive news
More than 2 crore plants planted at the behest of the grandmother
Born in 1966 in Chandigarh, Azad Jain alias Peepal Baba has been campaigning for planting trees for more than 40 years. They have planted more than 2 crore trees in different parts of the country so far. Of these, more than 1.25 crore are of peepal as it is considered as a source of oxygen. He says that in childhood, my grandmother said one day that do some work, the effect of which will last for a thousand years. This made a deep impression in my mind. After this I made my life to plant trees. From 26 January 1977, he launched a campaign for this.
Read full news …

What else is in the headlines

Those returning from Kumbh Mela must isolate themselves, says Madhya Pradesh government

Corona in Maharashtra: CM Uddhav Thackeray’s ultimatum – Do not be negligent, if the...