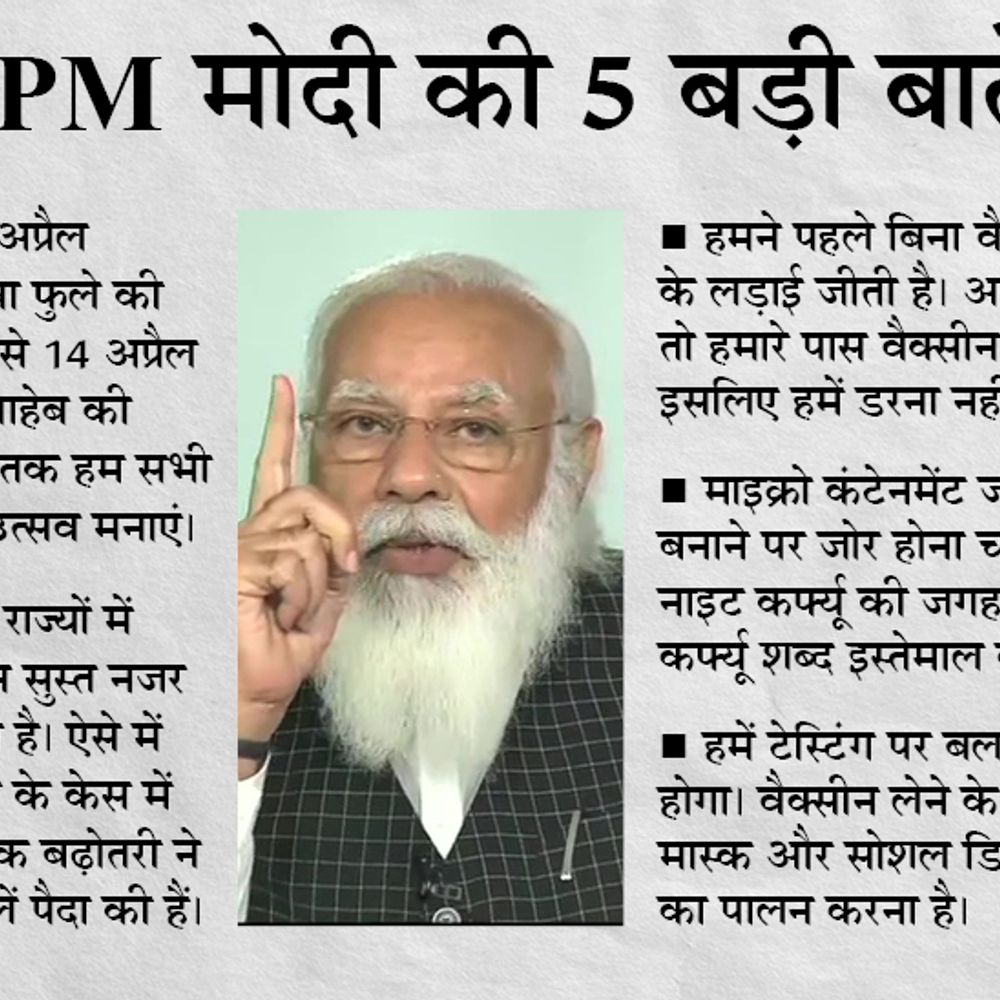 Prime Minister Narendra Modi once again held a meeting with the Chief Ministers of the states regarding Corona. Modi was more concerned about the speed of Corona this time. He emphasized on micro containment zone, night curfew, testing-trekking and treatment. Also instructed to be careful even after getting the vaccine. His concern was also that people are looking casual this time.

Modi said that the Corona curfew is making people aware. We need to pay attention to this. Now pay attention to the micro containment zone. The government has to work more hard in this, but this hard work will pay off. We have seen 10 lakh active cases last time. We had success on that. Now we have both experience and resources. We can stop this peak.

The Prime Minister said that more cases have been reported in Maharashtra, Chhattisgarh, Punjab, MP and Gujarat since last year. Some other states are also going in this direction. It is a matter of concern

2. More testing than vaccine is necessary
The Prime Minister said, ‘I urge all CMs to conduct a survey through machinery. Earlier people were afraid of mild symptoms in corona. These days people are feeling that there is a cold. They live life as before with the family. This brings the whole family in wraps. The root cause is that there are no symptoms. Pro active testing should be done for this. The more testing we do, the more people will come forward. By doing this we can save the family. Testing is needed more than vaccine. We have to go testing ourselves. People do not have to wait. ‘

3. Must have 70% RTPCR test
Modi said that Korana is such a thing that it will not come unless you bring it home. There is a great need for testing and trekking. Do not take it lightly. Must be a 70% RTPCR test. I have complained that there is negligence in the test. Samples should be taken properly for the test.

States that are being negligent should stop it. If there is a positive case, then there will be treatment. If not, then the patient will continue to infect the family. Some lab tests are also given separately. This is the deficiency. It has to be improved.

4. There should be no less than 30 contact tracing targets in 72 hours
Emphasizing on testing and tracing, the Prime Minister said that the focus has to be on testing in the Containment Zone. Not a single person should live without a test here. Tracing needs to be very fast at the administrative level. The target should not be less than 30 contact tracing in 72 hours.

Modi said that the boundaries of the Containment Zone should also be fixed. Seal the area where the case is. Not that one is infected in the tower, its adjacent tower sealed. Do not do this. There is no lethargy in efforts going to the ground.

5. Efforts are underway for new vaccination development
Modi said that AIIMS Delhi hosts webinars every Tuesday and Friday. It should be continuous. All the hospitals keep connecting with it. A review of ambulances, ventilators and oxygen is also necessary. Several points of vaccination have appeared in this meeting.

The PM also said that even the big countries of the world have set up criterias for vaccination, India is no different from them. You study, see this. Efforts are being made for new vaccination development. Stock and vestage have also been discussed.

6. Celebrate the Teeka festival from April 11 to April 14
The Prime Minister said that the vaccine was to stop the waste. The strategy has been made for the country only with the advice of the states. Target people above 45 years of 100% vaccination. On 11 April, Jyotiba Phule and on 14 April is the birth anniversary of Baba Ambedkar. Can we celebrate the Tika festival during this time? Vaccine more and more people by campaigning. During this, there should be zero vestage. This will also increase vaccination. For this, increase the number of centers.

7. Help the youth in vaccination
Modi said that it should be our endeavor to vaccine more and more eligible people in the festival. Help the youth apply the vaccine to those around you. There is an appeal to the youth that you can do a lot, but what the sop talks about, the youth should lead it. Emphasize protocol rather than youth vaccine. Earlier we also came down to the peak. Will also come this time.

8. Be careful even after applying the vaccine
The Prime Minister also said that the digital system is helping people get vaccinated. Help those who are unable to do so. Add NCC and NSS to it. Poor elderly people in cities take them to get vaccinated. Along with vaccination, do not be careless even after this.

Record cases surfaced in the country in 24 hours
A record 1 lakh 26 thousand 265 people were found infected in the country on Wednesday. The number of corona infections has now exceeded 1.29 crores. Maximum corona cases are coming from Maharashtra, Punjab, Chhattisgarh, Kerala, Karnataka, Gujarat, Delhi and MP. In Maharashtra, the Center has sent 30 special teams. On the other hand, Sunday lockdown has been announced in every district in Madhya Pradesh. On Wednesday, 5 patients died due to lack of oxygen.

‘Captain Saab did not fulfill even a single promise’: Kejriwal roars at farmers’ meet...