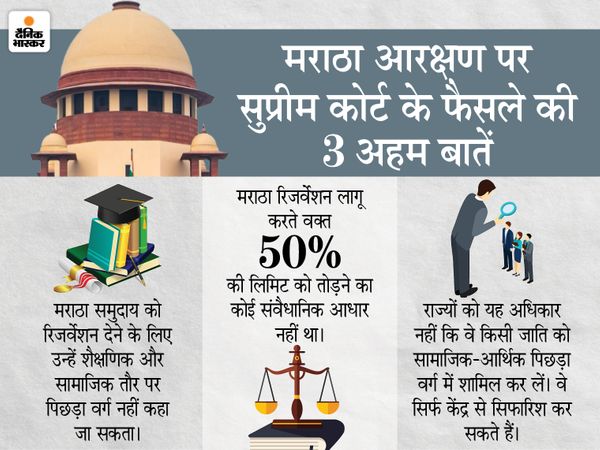 The Supreme Court has termed the reservation of Maratha community in Maharashtra in government jobs and educational institutions unconstitutional. This reservation was given on the basis of economic and social backwardness. The court, in its judgment on Wednesday, said that a decision that limits the 50% reservation need not be reconsidered. Maratha reservation violates the 50% limit.

3 important things about the decision of the Supreme Court

1. They cannot be called educationally and socially backward to give reservation to the people of Maratha community. There was no constitutional basis for breaking the limit of 50% while applying Maratha Reservation.

2. There is no need to reconsider the verdict in the Indira Sawhney case. There was no emergency in Maharashtra that Maratha reservation was necessary. This decision will not affect the admission made in PG Medical under Maratha quota till 9 September 2020.

3. States do not have the right to include any caste in the socio-economic backward classes. States can only identify such castes and make recommendations to the Center. The President can add that caste to the list of Socio Economic Backward Classes as per the instructions of the National Backward Classes Commission.

What is the whole matter
In 2018, the then Maharashtra government gave Maratha class 16% reservation in government jobs and higher education. The report of the Maharashtra Backward Classes Commission headed by Justice NG Gaikwad was made the basis for this. The Maratha reservation, which was set aside from the 27% reservation given to the OBC castes, violated the Supreme Court’s decision to keep the reservation limit to a maximum of 50%. 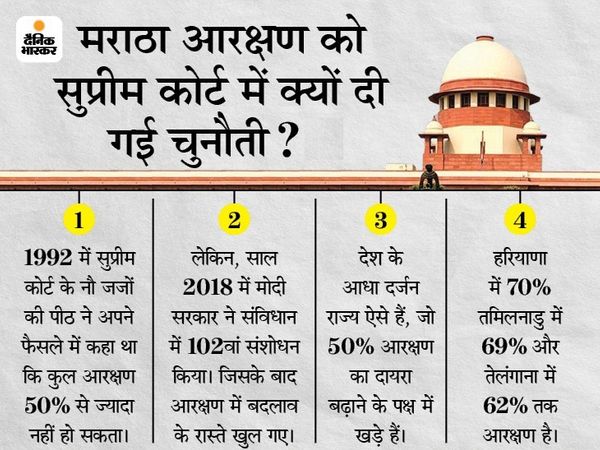 The High Court had maintained the Maratha reservation
The Bombay High Court challenged this reservation on 2 main grounds. First- there is no proper basis behind it. It is given only for political gain. Secondly, it violates the Supreme Court of India v. Government of India decision of 1992 given to keep the total reservation up to 50%.

But, in June 2019, the High Court ruled in favor of this reservation. The court held that in exceptional circumstances a class can be given reservation. However, reservation was reduced to 13% in jobs and 12% in higher education.

Effect of lockdown in Delhi: People bought liquor for a week, said – no...