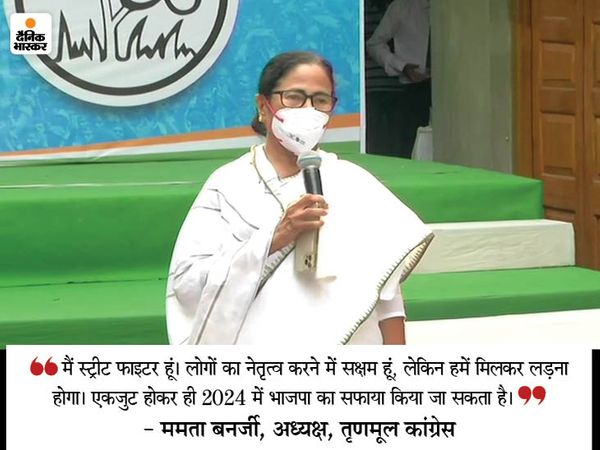 Mamta, who has won the victory in Bengal, has questioned the counting done in Nandigram. The Trinamool Congress chief made major allegations on the BJP on Monday. He said that many secrets are hidden behind his defeat. In order to defeat them, fraud has been done on a large level.

Mamta said that someone sent me a message. The sender of the message has been told that the returning officer of Nandigram was scared at the time of counting. Officers have said that if we get counted again, we could be in danger of life. Expressing doubt over the counting of votes in Nandigram, Mamta said that there was a server down for 4 hours. Meanwhile, the Governor had also congratulated us on the victory, but suddenly everything was changed.

Center giving priority to vaccine and oxygen to 2 to 3 states
Mamta said that I appeal to everyone to keep the peace and not let the situation of violence arise. I know that the BJP and the Central Forces have troubled us a lot, but we have to maintain peace. Now we have to focus all our attention on fighting the Corona epidemic. I request the Central Government to release 30 thousand crore rupees as soon as possible so that rapid vaccination can be done in the entire country. Mamta alleged that the central government is sending more and more vaccines and oxygen to only two-three states.

Indication to lead the opposition in 2024
Mamta Banerjee said that our party opposes all forms of violence. Even after this, BJP continued to malign us by spreading the photos of the old riots. This is the habit of the BJP. TMC did not celebrate any kind of victory even after winning the election with a majority. We can fight in solidarity against the BJP. I am a street fighter and have the ability to lead people. No one can do anything alone. Together we can annihilate the BJP in 2024. Mamta said that she announced the status of Kovid Warrior to all journalists in the state.

Mamta will take oath as Chief Minister on 5 May
Elections were held in 292 seats in Bengal. Elections on 2 seats were canceled after the death of the candidates. TMC has won 214 of these seats. However, Mamta Banerjee herself has lost the election from Nandigram seat. TMC will form government due to majority. On May 5, Mamta will take oath as Chief Minister for the third time. 66-year-old Mamata Banerjee will again have to contest from a seat. Earlier, on 20 May 2011, Mamta was sworn in as Chief Minister for the first time on 20 May 2011 and for the second time on 27 May 2016.

Government formation in 5 states this week

Dhawan’s blaze: The first batsman to do so in IPL history, Kohli also surpassed

Corona in India: 2.20 lakh patients recovered within 24 hours in the country, more...