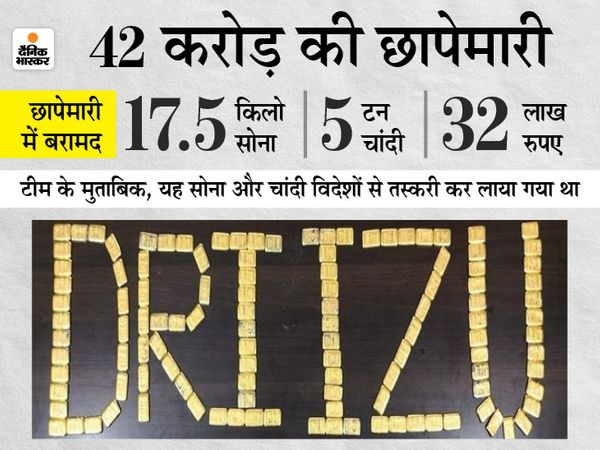 Raipur and Indore team of Revenue Intelligence Directorate (DRI) have taken major action together. After catching the two smugglers of Raipur, the team inquired and got information about Mohini Jewelers of Rajnandgaon. When the team raided, Chhattisgarh smuggled gold and silver biscuits and rods from abroad.

An official of Raipur DRI told Dainik Bhaskar that in this action 13 kg gold, 5 tons (5000 kg) silver, four and a half kg gold and 32 lakh rupees have been recovered from the smugglers of Raipur from Mohini Jewelers of Rajnandgaon. The price of gold and silver found in this action is about 42 crores. Right now three more people are being interrogated and detained.

​​​​​Gold biscuits started falling as soon as the strip opened
It has been said on behalf of the DRI that two people from Raipur were coming from Kolkata with 13 kg of gold. These were apprehended based on intelligence input. Officers searched both of them and nothing was found, but then something strange happened inside their clothes. On examination, it was found that he had wrapped something with a piece of tape inside the cloth on the back side.

When the officers opened the bar, gold biscuits of foreign marks started falling. During interrogation, both of them confessed to supplying the jeweler Jasraj Shanti Lal Baid of Rajnandgaon. The team then raided there. 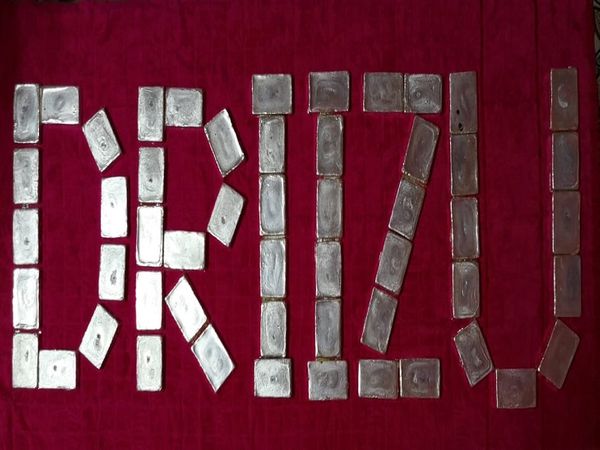 About 5 thousand kg of silver has also been seized in this action.

Illegal gold comes out of Dubai through Chhattisgarh via Kolkata
This action is a big proof that traders of Chhattisgarh are smuggling gold and silver from the eyes of government departments. A DRI official said that in most cases, gold smuggling starts in Dubai.

From there, businessmen secretly smuggle gold or silver from Myanmar, Bangladesh, then North East states and Bengal in India. This is also the case in this case. Two people from Raipur are in our custody, we are questioning them. Some businessmen of Raipur are also reported to be involved in this matter. Three people are also in custody from Rajnandgaon.

Red lasted for two days in Rajnandgaon
According to information received from Rajnandgaon, the Central Excise and Customs team was also involved in the raid. On May 1, around 12 noon, a raid was conducted at the house in Nandai of Jasraj Shantilal Baid, which lasted till late night.

Officers of Central Excise and Customs arrived in the jewelers’ house riding three vehicles and started investigating. During this time no one was allowed inside nor was anyone allowed outside. This team has taken its action for two consecutive days.

.
Chhattisgarh
Smuggling of gold and silver from abroad

Warned: The Parliamentary Committee had said in November 2020 that oxygen production should be...