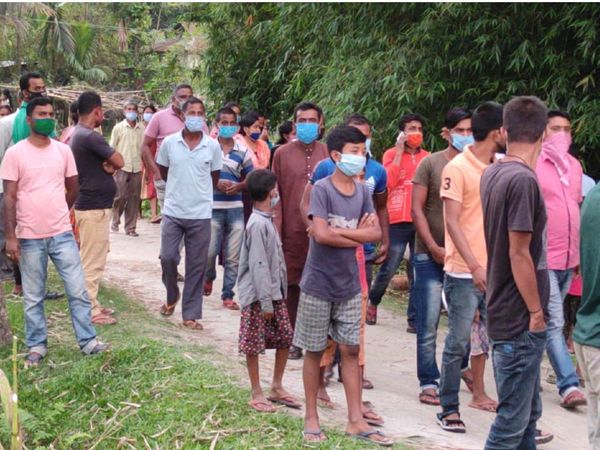 Due to the ongoing violence in Bengal, BJP workers are reaching Assam along with the family.

After the election results in West Bengal, BJP workers and leaders are under constant attack. So far, 11 people have been reported killed in the ongoing violence after the results. 6 of these deaths have been confirmed by the Government of Bengal. Meanwhile, Assam BJP veteran and minister Hemant Biswa Sarma has claimed that party workers and their families are being targeted in Bengal. Fearing attacks by TMC workers, around 400 activists and their families have entered Assam.

Also released photos
Sarma claimed this in a post on social media. Along with this, he also released four photos. A crowd can be seen in these. According to Sarma, after the results in Bengal, life-threatening attacks on BJP workers and their families are being carried out. Because of this fear, these people are leaving Bengal and coming to Assam. They are being given lodging and food in Dhubri district of here. Sarma has also tagged West Bengal Chief Minister Mamata Banerjee. He wrote that this is the scary face of democracy.

The Prime Minister also interfered
Prime Minister Modi is also worried about the violence in Bengal after the results. He called Prime Minister Narendra Modi to Governor Jagdeep Dhankhar and expressed concern over arson and killings in Bengal. Shortly before this, BJP national president JP Nadda arrived in Kolkata on Tuesday. They will stay in West Bengal for two days to review the areas of violence.

After reaching Kolkata, Nadda said that the events that have been seen and heard after the results of the election of West Bengal are surprising and worrying. I had heard such incidents at the time of Partition of India, but we have not seen so much intolerance after the election results in independent India.

Petition filed in Supreme Court
On the other hand, meanwhile, a petition was filed in the Supreme Court on Tuesday. It demands that the Supreme Court order the central government to deploy central security forces to prevent political violence in Bengal, so that law and order can be restored in the state. The National Human Rights Commission has also ordered spot inquiries at places of violence.

11 killed in violence since May 2
Incidents of violence have occurred in various parts from Sunday evening to Monday night. There are reports of 11 people killed in these incidents. The BJP alleges that it has nine of its workers. While a TMC in Bardhaman and an ISF worker in North 24 Parganas have lost their lives. The Trinamool Congress has been accused in these incidents.

Fauchi said: Oxygen conditions are very critical in India, vaccination is the only solution