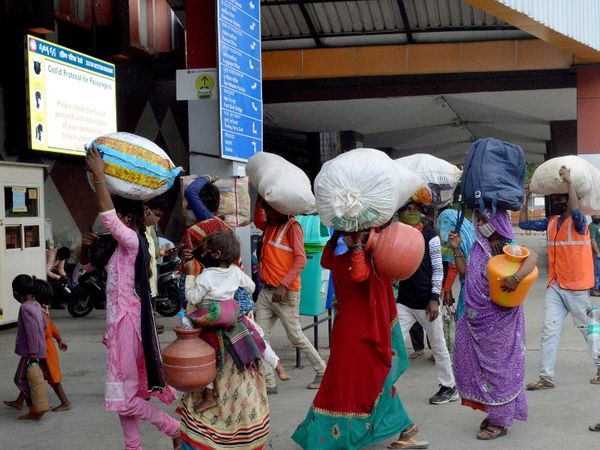 The photo is from Bengaluru, Karnataka. After the collapse of the work here, the order of return of migrant laborers is going on.

Testing is also increasing with the Corona case increasing day by day in the country. People are now getting corona investigations in large numbers. Due to this, the pressure on the laboratory of the country is increasing. In view of such circumstances, the Indian Council of Medical Research (ICMR) has issued a new advisory on corona testing on Tuesday.

It has been suggested to reduce the pressure on the lab by decreasing the RT-PCR test and increasing the rapid antigen test. The ICMR states that the second wave of infection is under tremendous pressure on testing labs. In such a situation, there is difficulty in completing the target of investigation. Lab workers are also constantly getting infected.

The ICMR said in the advisory that rapid antigen tests should be promoted. It was validated in 2020. It is now being used less. It is being used in the Containment Zone or in some Health Centers. This causes corona infection to be detected in just 20 minutes. The pressure on the labs will be reduced even if it is promoted.

Capacity of 1.5 million test daily in India
Overall positive rate of testing in India is more than 20%. Deaths are happening more than expected. To gain control over this, it is important to focus on isolation and home based treatment. There are currently 2506 molecular testing laboratories in India. Many types of tests can be done in these. Together, India has the capacity to conduct 1.5 million test projects.

ICMR said this on rapid test

This is how Kareena explains Taimur about Corona, shared Tom and Jerry’s video

Post-election violence in Bengal: clashes between BJP and Trinamool activists continue, 11 deaths in...