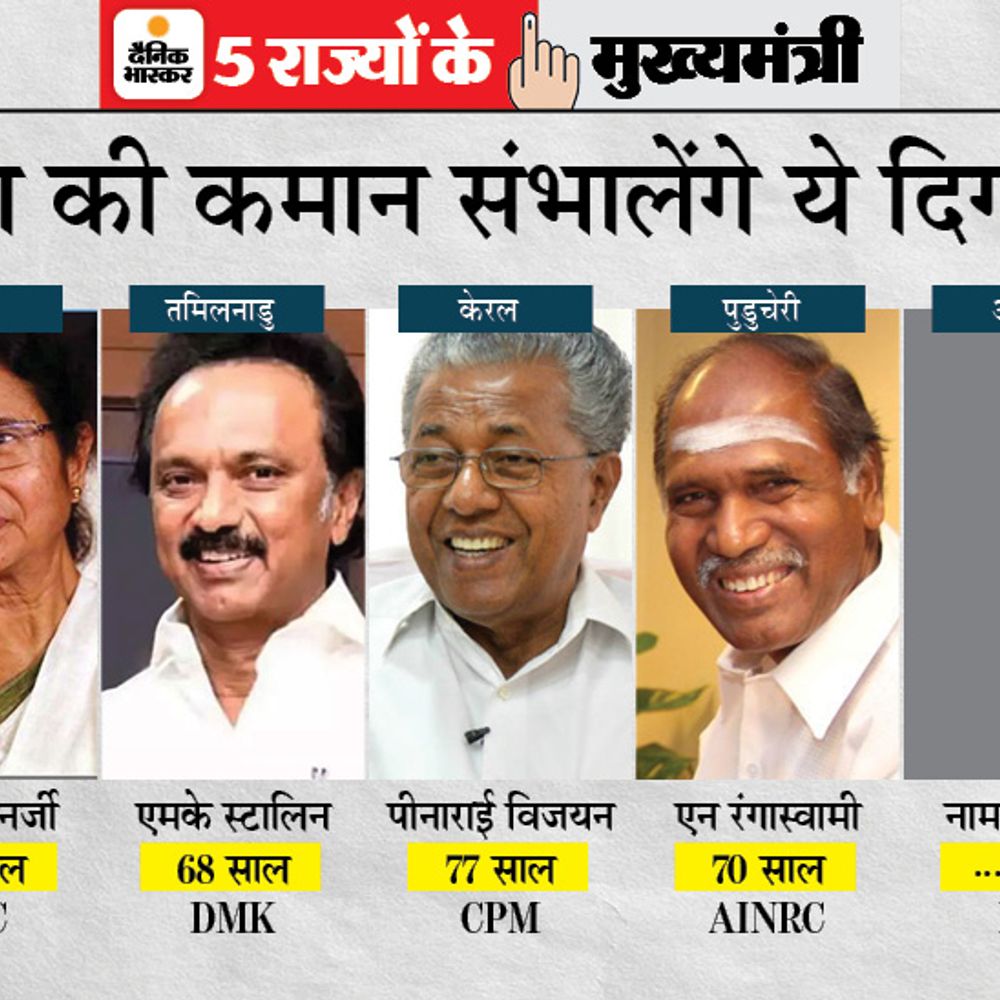 The results of the assembly elections held in 5 states (West Bengal, Tamil Nadu, Kerala, Assam and Puducherry) have been reached. Now the preparations for the formation of a new government have been accelerated here. Government will be formed in all the states this week. According to the results on Sunday, TMC in Bengal, BJP in Assam, DMK in Tamil Nadu, Communist in Kerala and NDA in Puducherry are to be formed. We tell you in which state, when and how the government will be formed in the next …

West Bengal: Mamta meets Governor
Mamata Banerjee will take the oath of Chief Minister for the third time on May 5, after winning a major victory in the assembly elections. State minister and senior TMC leader Partha Chatterjee gave this information on Monday. TMC has got 214 seats. However, Mamta Banerjee herself has lost the election from Nandigram seat. TMC will form government due to majority. In the evening, Mamta Banerjee also met the Governor.

However, 66-year-old Mamata Banerjee may again have to contest from a seat. Earlier, on 20 May 2011, Mamta was sworn in as Chief Minister for the first time on 20 May 2011 and for the second time on 27 May 2016. Probably Mamta will also form a new government in Bengal within a week.

Tamil Nadu: MK Stalin to take oath as Chief Minister on 7 May
MK Stalin’s Dravida Munnetra Kazhagam (DMK) has won 130 out of 234 seats in the assembly elections here. The party alliance has so far won 156 seats. After crossing the magic figure of the majority, a meeting of DMK MLAs has been held at 6 pm on Tuesday. Party General Secretary Durai Murugan told that the meeting has been held at Anna Arivalayam, the party’s headquarters in Chennai. In this meeting, DMK MLAs will officially elect MK Stalin as Chief Minister. After this, the letter of support of the MLAs will be given to Governor Banwarilal Purohit. MK Stalin will take oath as Chief Minister on 7 May.

Assam: Suspense on Chief Minister; Taj will wear Sonowal again by chance or Biswa
In the assembly elections here, BJP has won the second consecutive time. Chief Minister Sarbananda Sonowal had worked hard, but the party has yet another big face. This face is Hemant Biswa Sarma. Hemant was unable to become the chief minister while in the Congress. That is why he left the Congress and joined the BJP. It is now to see who among the two is made the Chief Minister. The party can also make one of these deputy CMs.

This time the BJP alliance has got 75 seats in Assam with 126 assembly seats. Means one seat more than in 2016. The Congress had to content itself with 50 seats. BJP contested here along with the Assam Gana Parishad (AGP) and the United People’s Party Liberal (UPPL). Congress, on the other hand, fielded its candidates in association with AIUDF, BPF, CPI (M), CPI, CPI (ML), AGM and RJD.

Kerala: Vijayan meets Governor, MLAs meet soon
Chief Minister Pinarayi Vijayan met Governor Arif Mohammad Khan on Monday after achieving a resounding victory in Kerala. He informed that there will be a decision on the formation of the government in the Executive Council of the Communist Party of India. According to party sources, the government formation work will be completed this week in view of the epidemic.

The Left Democratic Front (LDF) contested the entire election under the leadership of Chief Minister Pinarayi Vijayan. The LDF also includes 12 other parties along with the Communist Party of India (Marxist). The LDF has won 92 seats more than the majority here. At the same time, the Congress alliance has got 39 seats.

Puducherry: Rangaswamy will be the chief minister for the second time, meeting today
NDA government is going to be formed for the first time in Puducherry, a small union territory. Here the BJP and AIDMK, led by All India NR Congress i.e. AINRC, won an absolute majority by winning 16 seats. In this way, the Chief Minister’s post will be handled by the President of AINRC, N. Rangaswamy. Rangaswamy will be sworn in as the Chief Minister of Puducherry for the second time. There will be a meeting of party MLAs this evening. In this, the outline of the swearing-in ceremony will be decided and the official announcement of the name of Rangaswamy will be done.

Here AINRC has won 10 seats, BJP 6 seats for the first time. At the same time, Congress has got two seats and DMK has 6 seats. Independent candidates won 6 seats. Here in February this year, the Congress government fell due to a minority. President’s rule has been in place since then. The Congress, which formed a government with a majority in 2016, was lagging behind a lot this time. The last time Congress got 15 seats, this time the figure reached 2. However, the Congress-DMK alliance will remain in opposition. Both have 8 seats, while independents have won 6.