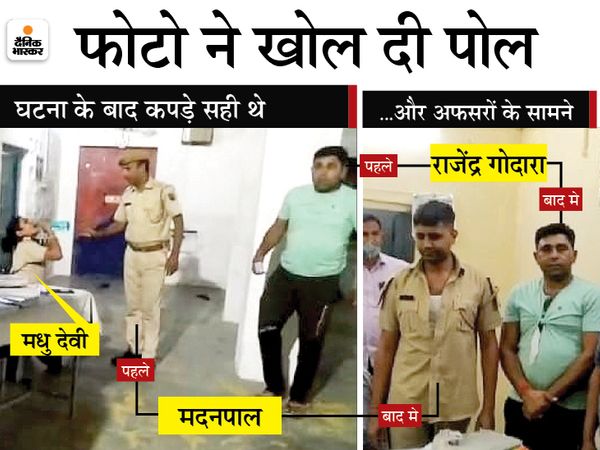 The collusion of security guards in driving the prisoners out of Phalodi jail is being exposed from this photo itself. Two tore their clothes on their own.

On Monday evening, 16 prisoners escaped from the Phalodi jail in Jodhpur by throwing pepper in the eye of a female soldier. Initial investigations revealed the secret of the prisoners’ escape or extermination on Tuesday. The collusion of four policemen has been revealed in this. These 4 characters are involved in the entire conspiracy to get the prisoners out of the prison. They have been suspended after initial investigation.

This whole incident is like the story of a film. Soon after the incident, soldiers Madanpal and Rajendra Godara were standing near the injured woman soldier. Then both of them had the right clothes. But half an hour later, when these two officers were giving statements, their clothes were torn.

They spoke of being in a tizzy with the prisoners, while it was clear from the pictures that the latter made no attempt to stop the prisoners. Later, both of them tore their uniforms and dress and tried to show that they tried hard to prevent the prisoners from escaping. After this, all four security guards came under suspicion.

Female policeman exaggeratedly told the story
After the prisoners escaped, the lady guard Madhu exaggerated that he tried to stop the prisoners while running. During this, the prisoners picked him up and threw him. It also hurt her, but she tried her best without caring for herself. Immediately after the incident, he was also hurt and acted strongly to deteriorate his health, but his question was revealed in the questioning. Jail caretaker Jail Navibux, guards Sunil Kumar, Madanpal Singh and Madhu Devi have been suspended.

CCTV footage of 16 prisoners escaping: All prisoners run out of jail and run away in Scorpio

Inside gate opened, outside gate was not locked
The prison has two gates. There should be a lock on one of the two at the time of detention and evacuation of the detainees, but on Monday, the outer gate was not locked at the time of the incident and the inside gate was opened in the same way. In such a situation, there was neither the need to tear down the walls nor to run any weapon in front of the prisoners. The sub-jail in the courtyard complex is meant to house detainees under consideration only. This jail remained in an area of ​​40 x 60 feet. This is the SDM court here. There are three barracks in such a small space. Also, there are prison offices and staff quarters.

Video: Never seen such a catch, Fielder ran from the middle ground to the...