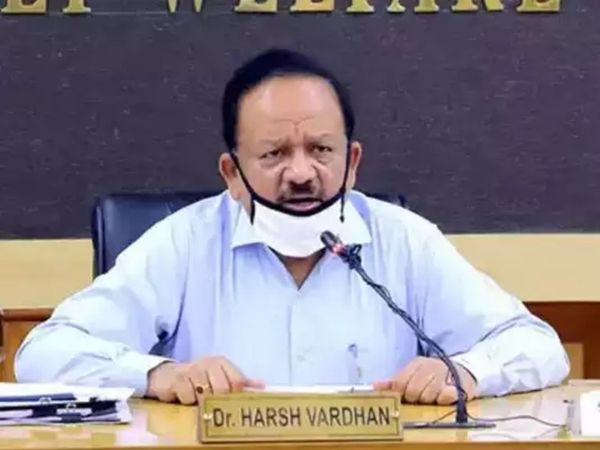 The Union Health Ministry has written to the governments of Punjab, Delhi and Maharashtra asking them to increase vaccination.

The Union Health Minister, Dr. Harsh Vardhan, has lashed out at the governments of Maharashtra and Chhattisgarh complaining about the vaccine deficiency. At the same time, he also pulled out the Punjab and Delhi government, which failed to get the vaccination done. Dr. Harsh Vardhan, while replying to the allegations of the Government of Maharashtra, said that there is no shortage of vaccine anywhere in the country. The Maharashtra government is repeating its mistakes time and again.

The Union Health Minister said that the situation in Maharashtra deteriorated due to repeat mistakes. Now the government there is blaming us for hiding its failures. He said that all the states which are talking about vaccine deficiency are working to scare people politically.

Questioning the vaccine is wrong
Dr. Harsh Vardhan also raised the Health Minister of Chhattisgarh in the dock. He said that the Chhattisgarh government had refused to introduce Kovacsin in his state. He was constantly making statements whose intention is to spread misinformation and nervousness about vaccination. This has weakened the ongoing fight against Corona.

There is also a decrease in vaccination of health workers in Punjab, Delhi, Maharashtra
The Health Minister said that only 86% of the health workers were given the first dose of corona vaccine by the Maharashtra government. 72% of the health workers were vaccinated in Delhi and only 64% in Punjab. On the other hand, in 10 other states and union territories, more than 90% of health workers have been vaccinated. Similarly, these three governments have failed in applying vaccine to the front line workers. So far only 73% in Maharashtra, 71% in Delhi and 65% in Punjab were given the first dose of vaccine. This figure is less than the national average.

Wrote letter to state governments
The Union Health Ministry has written to the Government of Punjab, Maharashtra and Delhi to increase vaccination. It has been told in the letter that less than the national average vaccine has been installed in these three states. In the letter written to the Government of Maharashtra, it has been said that 1 crore 6 lakh 19 thousand 190 vaccine doses were sent by the Central Government in the state. Out of these, only 90 lakh 53 thousand 523 vaccines have been used. The rest of the vaccine dose is still left. In such a situation, the lack of vaccine is absolutely wrong.

View: How to battle a pandemic? Valuable lessons from India

Fines on traffic jam in Suez Canal: Penalty of 7500 crores on cargo ship...