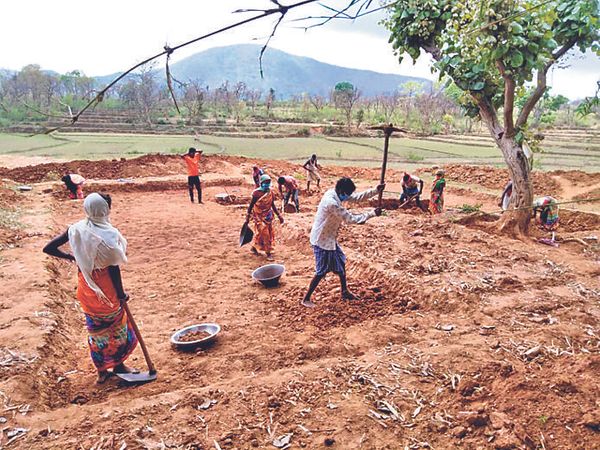 Not a single villager had a positive report.

In the period of epidemic, corona has not been able to cross 30 thousand population of 20 villages of Bokaro district. Due to pure climate, clean food, living, hygiene and hard work, every person here is full of immunity. Dainik Bhaskar learned the condition of 32 Santhal tribal and Kurmi dominated villages in 5 days. In these, not a single infected was found in 3834 families from 20 villages.

Seek information from the head, woman committee member, servant. Talked to doctor and environmentalist. The villages of Kasmar, Jaridih and Petarwar are more aware than the city. Awareness such that they work with social distancing. Even in the village chaupal, they wear masks and sit at a distance.

Medical in-charge said – no positive report from wild and hilly region
Medical In-charge of Kasmar, Dr. Nawab informed that control rooms have been set up in all suburbs of the district. Every day, 300 to 400 people of the village are undergoing tests in hospitals. There has not been a positive report of a single villager in the villages of hilly and forest areas, while more patients are coming from urban and colliery areas.

50% population are Santhal tribals, 30% Kurmi
In 20 villages, 50% of the population are Santali tribals, while 30% are Kurmis. Chandra chief Rajendra Nayak in Petarwar block said that the area is surrounded by forests. Here the climate is pure, so people have more immunity power.

Environmentalist said – every 12 hours of oxygen doubled in the villages in the forest
Oxygen levels are very high in villages close to the forest. On an average, people require 550 liters of oxygen in 12 hours. At the same time, people of the village settled at the foothills of the forest and mountain are getting 1100 liters of oxygen. Therefore the effect of corona is less here. The problem is more due to vehicles, AC, industries in cities. Urban people use hybrid crops more as food. This reduces hemoglobin, then reduces immunity.
-Gulab Chandra, environmentalist and coordinator of Damodar Bachao Abhiyan

Britain: Corona cases rise, additional flights from India will not be approved at Heathrow...

Supreme Court: Central government should amend the law to expedite the disposal of cases...