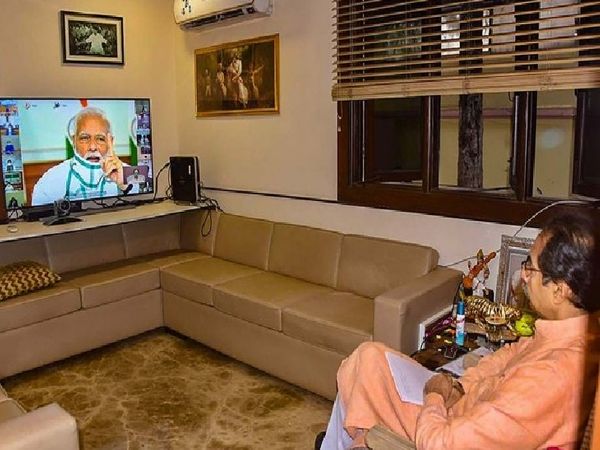 This meeting between CM Uddhav and PM Modi along with other Chief Ministers will take place through video conferencing.

The Prime Minister is going to meet again with the Chief Ministers today in the midst of the ongoing Corona crisis in Maharashtra and many parts of the country. The status of the corona rising in Maharashtra is expected to be discussed prominently in this meeting, which takes place through video conferencing.

CM Uddhav Thackeray may raise the issue of dwindling vaccine stocks in Maharashtra, increasing demand for oxygen and lowering the age limit for vaccination. Apart from this, there may also be talk of lockdown and stringent ban at the local level.

CM of Maharashtra will ask for these five

1. Dose of 6 lakh vaccine should be provided to Maharashtra every day.

2. The price of Remedisvir should be controlled.

3. Supply of oxygen should be increased from neighboring states.

5. The age limit for vaccination should be reduced from 45 to 25 years.

Sharad Pawar said – Center is continuously supporting Maharashtra
In the midst of Corona’s deteriorating situation, Shiv Sena leaders and ministers are accusing the Center of not giving vaccines, while Nationalist Congress Party (NCP) chief Sharad Pawar has said that in this difficult time of the pandemic, the central government is constantly in the state. It is supporting the government. On Thursday, Pawar said – “The central government is cooperating with the state government in this difficult time of the epidemic.” We all have to unite and fight this menace. Both the state and the Center will have to come together and find a way to fight the epidemic. ‘

Sanjay Raut further said, ‘The attempt to destabilize the Maharashtra government has been going on since day one, but this effort will not succeed.’

Vaccine stock to end in Maharashtra

Principal Secretary (Health) Pradeep Vyas said that till Wednesday morning there were about 14 lakh vaccine doses in the state. In many districts the stock will run out by today or tomorrow. The Center is aware of this and we have told them in writing. He told that if schedule and vaccine availability are there, five lakh shots can be given daily in Maharashtra easily.

Maharashtra Health Minister Rajesh Tope also said that the state needs 40 lakh doses in a week. We are giving vaccines to 4-5 lakh people a day, so if vaccine is not found, then there can be a big problem. Tope said, “We accept the challenge of putting 6 lakh doses of the center every day, but there should be a vaccine.”

Vaccination stopped in Satara due to vaccine deficiency

The Corona vaccination program has been banned for the present since Wednesday night in Satara, Maharashtra. The major reason behind this is being attributed to the lack of corona vaccine. The district administration has cited the end of the corona vaccine in the district. Giving this information, Satara Zilla Parishad Chief Executive Officer Vinay Gowda said that so far 2.6 lakh people aged over 45 years have been given the first dose of vaccine in Satara.

There is a huge shortage of oxygen in Maharashtra

The state’s Food and Drug Regulator (FDA) has expressed apprehensions about the lack of oxygen in the coming days. The state health department has informed the FDA that by the end of April, the number of active cases in Maharashtra could reach 9 lakh. With this, the demand for oxygen will also double. In the month of February, where 150 to 200 metric tons of oxygen was required in the hospitals of Maharashtra, the demand has increased to 650 to 750 metric tons by the end of March.

In view of the increasing cases in Maharashtra, the central government has sent a medical team of 30 people to Maharashtra, which will help the state officials to create a strategy to control corona.

IPL 2021: This raging batsman of Shahrukh Khan’s KKR is in relationship with Govinda’s...