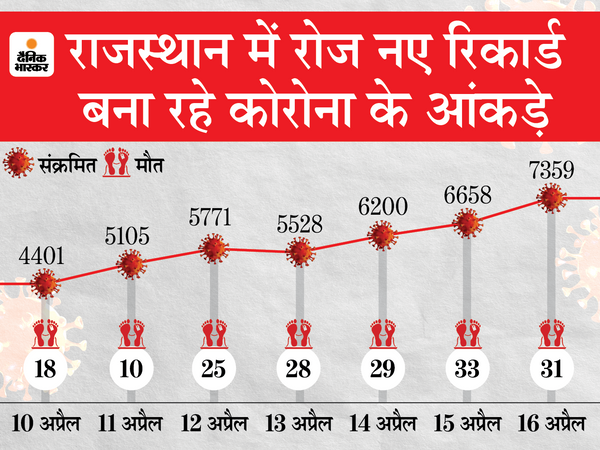 Corona is spreading rapidly in Rajasthan. In the last 16 days, 62,160 new patients have been received in the state, more than those received in September-October last year. The state had the highest number of 71,130 patients in November. Considering the rapid increase in patients, the record of November will also be broken in two-three days.

The total number of corona patients on Saturday in the state may cross 4 lakh. In view of the increasing infection, the weekend lockdown has been imposed across the state from Friday evening, which will remain till Monday morning. 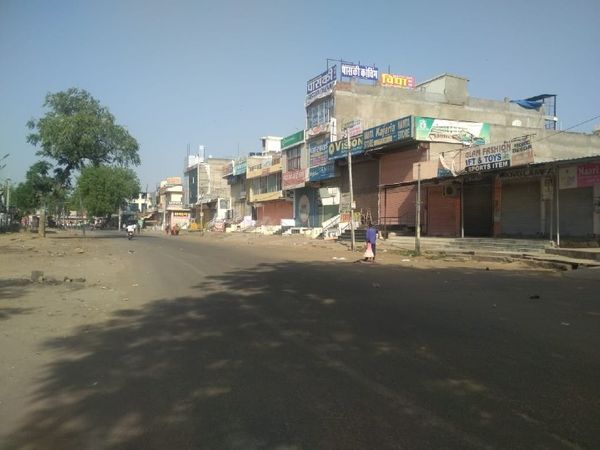 The photo is from Sheopur Bazar located in Pratap Nagar, Jaipur, where there is a lot of chaos at 8 am in the normal days, but today the atmosphere is deserted due to the lockdown.

Death of a patient due to lack of oxygen in Jodhpur
A case of Miss Management has also come up in Mandoj District Hospital, Jodhpur. A patient admitted here was in dire need of oxygen, but due to lack of oxygen cylinders, the elderly woman succumbed. It was later discovered that an oxygen cylinder was in the OT room, but no one noticed. Talking about the Corona cases in Jodhpur, there have been record breaking cases on Friday. The highest number of 1144 patients was found here during the last 24 hours.

Wandering patients even after beds are available in Udaipur
The circumstances of miss management are also seen in Udaipur. Patients are not being admitted despite beds being vacant in some hospitals here. People are contacting the hospital superintendent and CMHO for other problems, including beds, but they are not picking up anyone’s phone.

Many hospitals in Udaipur are neither getting patients admitted nor are they getting any other facilities. In such a situation, patients’ families are wandering in hospitals here and there. The rapid increase in the number of corona patients in Udaipur can be gauged from the fact that there have been 7,606 patients within the last 16 days, while the total number of patients in Udaipur as on 31 March was only 13,292.

More than 7,000 patients in 24 hours across the state
If you look at the situation of corona in Rajasthan, 7,359 patients have been found within the last 24 hours, which is a new record. In view of the increasing number of patients in the state, the consumption of oxygen has increased rapidly. In such a situation, the government has ordered all the collectors to keep a buffer stock of more than 300 D-type medical oxygen filled cylinders. The power companies have been asked to provide 3 phase supply to the oxygen generating plants 24 hours without stopping the production of oxygen in the plant. 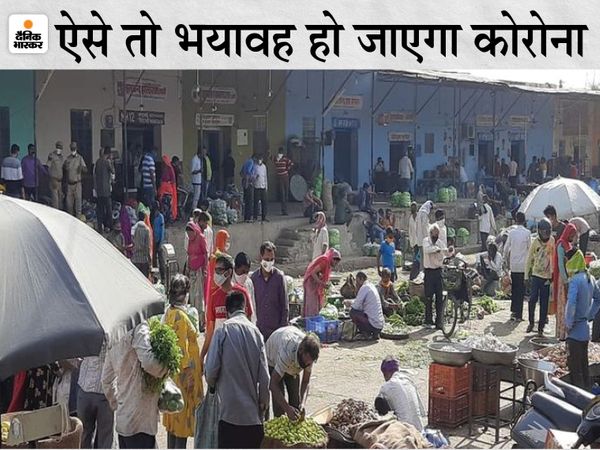 Photo is of Ramganj mandi of Ajmer. In the midst of the lockdown, people neither appeared to follow social distancing nor put on masks.

In 9 districts, the situation came uncontrollable, in the red zone
In Rajasthan, there are districts like Jaipur, Jodhpur, Kota, Rajsamand, Sirohi, Udaipur, Bhilwara, Dungarpur and Baran which have come in the Red Zone. In April, the infection rate in these districts has been more than 10%. The worst situation is in Udaipur. In the first 13 days of April, the rate of infection has been recorded above 18%.

State of corona in the state

Samsung Rolls Out Pick and Drop Repair Service in 46 Indian Cities Amid Rising...

For the relief of Coronavirus to India, Israel started praying something like this, chanting...