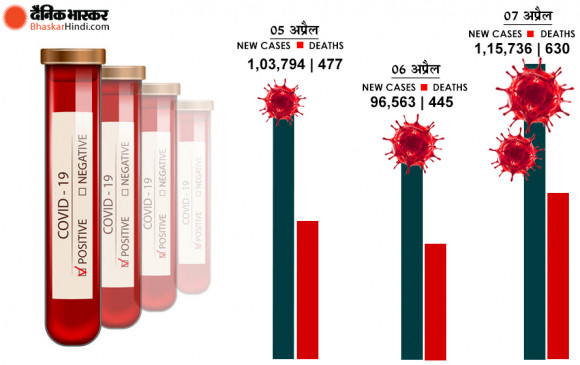 Digital Desk, New Delhi. This news is very worrying for the countrymen. For the first time in the country, more than 1 lakh 15 thousand corona patients have been found in a single day. This is the biggest figure till you. Earlier on April 4, 1 lakh 3 thousand corona patients were found. Rising figures have broken all records. Even though vaccination work is being done in the country. But the risk of corona has now doubled. The number of active patients is increasing rapidly. The situation has become critical in several states including Maharashtra, Madhya Pradesh, Gujarat, Punjab, Kerala, Rajasthan, Chhattisgarh, Delhi. State governments are on alert. Every effort is being made to prevent corona infection. Now there seems to be a lockdown-like situation in the states.

The condition of these states is worrisome
Maharashtra
The situation in the state of Maharashtra is most worrisome in the case of corona infection. In the last 24 hours, 55 thousand 469 new cases have been reported. At the same time, 34 thousand 256 patients have been discharged. While 297 died. So far, 31.13 lakh people have been affected by the epidemic in the state. Of these, 25.83 lakh people have recovered, while 56,330 have died. Currently, about 4.72 lakh people are being treated here.

Madhya Pradesh
On Tuesday, 3,722 new patients were found in the state of Madhya Pradesh. 2,203 people recovered, while 18 died. So far, 3.13 lakh people have been affected by the epidemic in the state. Of these, 2.85 lakh have been cured, while 4,073 have died. Currently, 24,155 people are undergoing treatment. The worst situation is in the districts of Bhopal, Indore, Gwalior, Jabalpur and Chhindwara in the state.

Rajasthan
On Tuesday, 2,236 infected people were identified in the state of Rajasthan. 851 patients recovered and 13 people died. So far, about 3.43 lakh patients have been affected by the epidemic in the state. Of these, 3.24 lakh have been cured, while 2,854 have lost their lives. Currently 16,140 patients are undergoing treatment.

Gujarat
On Tuesday, 3,280 new corona patients were found in Gujarat. 2,167 patients recovered, while 17 died. So far, 3.24 lakh people have been affected by the epidemic in the state. Of these, 3.02 lakh have been cured, while 4,598 patients have died and 17,348 people are currently undergoing treatment.

Data released by the Union Ministry of Health

Click here to see the statistics of vaccination
https://www.mohfw.gov.in/pdf/CumulativeCOVIDVaccinationReport6thApril2021.pdf

Video: Virat Kohli could not control himself after Jos Buttler was out, gave this...