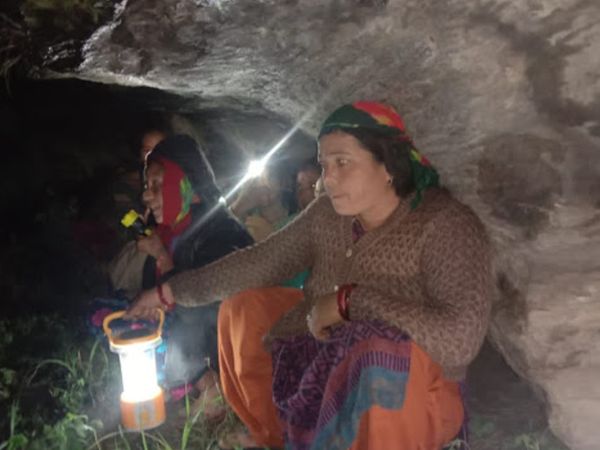 In order to save lives, people sat under rocks in the jungle overnight.

Panic spread in Chamoli in Uttarakhand on Tuesday night. After the heavy rains, the sound of rising water level of the Rishiganga river came up in Raini village, then people of other villages including Raini Valli, Raini Palli and Gujagu ran towards the forests in fear and stayed there overnight. Because they have not forgotten the devastation of February 7, when the glacier at Tapovan in Chamoli district broke and fell into the Rishiganga River. After that accident, the bodies of more than 50 people were found, while more than 150 people could not be found.

The cloudburst incident on Tuesday has affected 8 water and 3 water supply schemes in Chamoli district. According to Additional Deputy Commissioner Mukesh Repswal, the situation is now under control. Damage to agriculture and horticulture is being assessed. The matter of relief is that there is no news of the death of any human being.

After the cloudburst, DM Swati Bhadoria told that NTPC projects running in Tapovan area were closed due to rising water level in the Rishiganga river. On the other hand, Chief Minister Tirath Singh Rawat said that the DM has been instructed to provide immediate help to the affected people. Arrangements will be made for the treatment of those injured in this incident and for those whose houses have been damaged.

Cloud burst in Uttarkashi on Monday
A cloudburst occurred in Uttarkashi in Uttarakhand on Monday. The incident took place in Kumarara village in Chinyalisaur block. This caused the canal water here to overflow and enter the houses. The walls of the houses were buried for several feet due to the mud that came with the water. Many gaushalas have also suffered damage in this accident. In Narakota in Rudraprayag district, cloudburst swept the mountains with water and came to the houses and the villagers saved their lives by going to higher areas.

Tamil Nadu: Campaign for final phase ends, AIADMK will return to power for the...

Sunny Leone bought a luxurious house in Mumbai, you will be surprised to know...