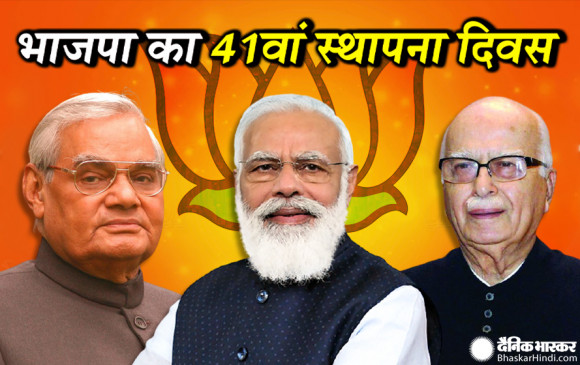 Digital Desk, New Delhi. The largest political party in the world, the Bharatiya Janata Party, is celebrating its 41st Foundation Day today. On this occasion, Prime Minister of India Narendra Modi addressed BJP workers today. He said, our party is not just an election winning machine, we are getting the support of every class and community. I congratulate all of you on the BJP Foundation Day.

PM Modi said, 41 years of the party’s glorious journey are being completed today. These 41 years bear witness to how a party works with service and dedication. We have always been blessed by many seniors like our respected Lal Krishna Advani ji, respected Murali Manohar Joshi ji who have shaped and expanded the Bharatiya Janata Party. There will hardly be any state or district in the country, where 2-3 generations have not been spent for the party.

On this occasion, PM Modi said, I pay respects to every person who has contributed to this yagya of national service from Jana Sangh to BJP. On behalf of every BJP worker, I pay homage to countless such great personalities like Dr. Shyamaprasad Mukherjee ji, Pandit Deendayal Upadhyay ji, Atal Bihari Vajpayee ji, Kushabhau Thakre ji, Rajmata Scindia ji. The power of Dr. Shyama Prasad Mukherjee’s sacrifice is that we can fulfill that dream.

PM Modi said, remove Article 370 and give constitutional rights to Kashmir. Last year, Corona posed an unprecedented crisis to the entire country. Then all of you, forgetting your happiness and sorrow, continued to serve the countrymen. You resolved to ‘Seva Hi Sangathan’, worked for it.

PM Modi said, Gandhiji used to say that decisions and schemes should be those which benefit the person standing in the last line of society. We have worked tirelessly to bring that original spirit of Gandhiji. Today, the village-poor association with BJP is increasing because today they are seeing Antyodaya realizing for the first time. Today, the youth giving birth in the 21st century is with the BJP, with the policies of the BJP, with the efforts of the BJP.

PM Modi said, Today the village-poor association with BJP is increasing because today, for the first time, they are seeing Antyodaya coming true. Today, the youth giving birth in the 21st century is with the BJP, with the policies of the BJP, with the efforts of the BJP. The Mari government is being evaluated by its delivery system. This is becoming the new motto of the functioning of governments in the country. Despite this, the misfortune is that if the BJP wins the elections then it is called the machine to win the elections.

Washington Sundar names his dog at Australia’s big stadium, Rea will surprise you

What Do I Need To Make It In Business?