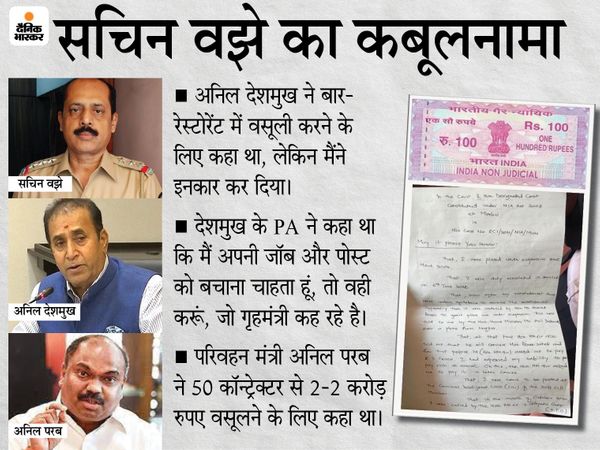 In the Antilia case, the National Investigation Agency (NIA) on Wednesday presented former API Sachin Vazh in a special court. On the demand of the investigating agency, the court has extended the custody of Vazh till April 9. During the production, Sachin Waze presented a written statement before the court. He made this statement during the custody of the NIA. In this, Sachin Vazh has accused Transport Minister Anil Parab along with former Maharashtra Home Minister Anil Deshmukh for asking for illegal recovery.

In the written statement, he has also said that the complete information about the recovery case was given to Anil Deshmukh’s PA. Sachin Vaze said in his statement that NCP Chief Sharad Pawar had opposed his reinstatement. They wanted the reinstatement of the tree to be canceled.

Sachin Vazh said in a statement to the NIA, ‘I joined duty again on 6 June 2020. Sharad Pawar was not happy with my joining of duty. They asked me to suspend again. This was told by Anil Deshmukh himself. He had also asked me for 2 crore rupees to convince Pawar saheb. It was not possible for me to pay such a huge amount. After this, the Home Minister asked me to repay it later. After this, I was posted in the Crime Intelligence Unit (CIU) of Mumbai.

Anil Parab asked a trust to recover money in the name of investigation
Accusing Minister Anil Parab, Sachin Vazh said, ‘After this, in October 2020, Anil Deshmukh called me to Sahyadri Guest House. Before that, in July-August 2020, Maharashtra Minister Anil Parab called me at his official bungalow. In the same week, internal orders were also given regarding posting of DCP posts.

He further told me that during the meeting, Anil Parab told me to pay attention to the SBUT (Saifee Burhani Upliftment Trust) Complaint which was on a preliminary stage. At the same time, I was asked to bargain with the trustees of SBUT to close the inquiry and demand an amount of 50 crores for it.

They also asked me to do the initial talk for the amount, but I refused to do so as I do not know any of the SBUT and I had nothing to do with this inquiry.

Parab asks 50 companies to recover Rs 2-2 crores
Referring to another meeting with Anil Parab, Vazhe said, ‘In January 2020, Minister Anil Parab again called me to his government bungalow and asked him to command an inquiry against the Praudulant contractor listed in BMC.

Minister Anil Parab asked each of the 50 listed companies to collect Rs 2 crore. Because investigation was going on against these companies on a complaint, which was in the early stages. ‘

Full story of the entire game of recovery told to Parambir Singh
At the end of the letter, he told me, ‘After this, I had told this thing to the then Commissioner Parambir Singh, and also said that in the coming future I will be implicated in some controversy. After this, the then commissioner Parambir Singh refused to let me get involved in any illegal recovery. ‘ At the end of the letter, he wrote – Judge Sir, I am bringing these things to you because I want me to get justice.

Anil Parab along with Deshmukh on CBI radar
After this disclosure by Sachin Vazh, Transport Minister Anil Parab’s difficulties may increase with former Home Minister Anil Deshmukh. The BJP has again got a chance to surround the Maharashtra government. This statement of Vazhe confirms the allegation of former Mumbai commissioner Parambir Singh’s recovery of Rs 100 crore against Deshmukh.

The CBI team has reached Mumbai to investigate the matter, it is believed that in a few hours it can interrogate Sachin Waze. After the revelations of Vaje, now minister Anil Parab has also come on the radar of CBI.

Parab said – Swear on the daughters, the allegations against me are false.
Minister Anil Parab came in front of the media after he accused me and said that I swear by my two daughters, I swear by Balasaheb, all the allegations against me are false. This is an attempt to discredit me. BJP leaders had been shouting for two-three days. He was referring to another victim. He was already aware of this matter. The BJP already knew that Sachin was going to give me a letter today, so he was talking about ‘take the third wicket’. I have no acquaintance with the municipal contractor. So I am ready to face any inquiry today.

Parab said why did Sachin Vaz not take my name first? He came once and wrote a letter. This proves that he wants to discredit the government. I am willing to undergo any investigation and narco test in this matter.

The clan of crocodiles in Chambal: 35 new ‘guests’ left in the river, will...