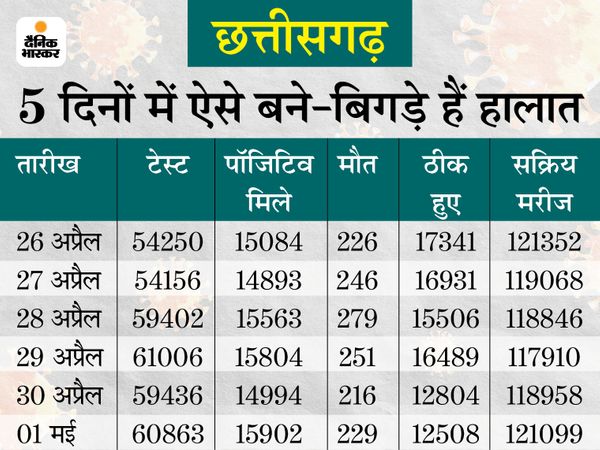 Chhattisgarh has become the fifth state in the country in terms of deaths from Corona in one day. On Saturday, 229 deaths were recorded in the state. There were 802 deaths in Maharashtra, 412 in Delhi, 304 in Uttar Pradesh and 271 in Karnataka.

Saturday’s day was overshadowed by the improvement in Corona infection in Chhattisgarh since last week. 15,902 new patients were found in the state. Compared to them, the number of recovers was only 13,532. This is the first time in the last four days that there has been such a big difference between the number of newly infected and those who are cured. Earlier, on April 26, 17,341 people were cured compared to 15,084 newly infected. On April 27, the number of cured people was 16,931 compared to 14,893 infected.

44231 active patients increased within 20-22 days of lockdown
In the first-second week of April, the lockdown had started in the districts of Chhattisgarh. The lockdown started in Raipur district from 6 pm on April 9. By 8 pm that day, 11,447 new infections were confirmed in the state. At the same time, 2,305 people were cured and 63 people died. The number of active patients then was 76,838. But the daily average of new patients getting daily in 20-22 days of lockdown has reached 15,000. In this case, the number of active patients has been 1 lakh 21 thousand 99. This is 44,231 more than the first day of lockdown.