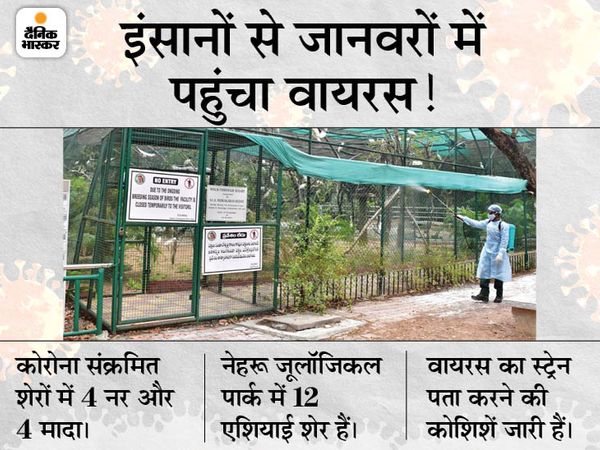 For the first time in the country, there has been a case of 8 lions being corona positive. All these Asiatic lions infected with Kovid-19 belong to the Nehru Zoological Park (NZP) in Hyderabad. According to the media report, this was told to the Zoo management only on 29 April.

Employees working at Xu had noticed signs of corona in the lions on 24 April. According to him, there was a decline in the appetite of lions. His nose was runny and he also had symptoms like a cold-cough. After seeing the symptoms, the employees informed this to the Zoo management. The management decided to get everyone tested.

4 males and 4 females in positive lions
The Center for Cellular and Molecular Biology (CCMB) had reported that the RT-PCR report of 8 lions came back positive. There are 12 Asiatic lions in the Nehru Zoological Park. Among them, 4 males and 4 females are positive. Zoo director Siddhanand Kukreti said that it is true that the coronas have symptoms of lions, but we have not yet officially received their corona report. At the moment all the lions of Xu are healthy.

Genome sequencing will reveal how the virus reached the zoo
Swab samples were taken from the lower part of the lions’ palate. They were sent to the CCMB lab in Hyderabad for examination. It is being told that genome sequencing of lions samples will be done in this lab, so that it can be found which strain of the virus is there and how to reach the zoo.

Park is in densely populated area
The management has closed Xu to the general public. The Nehru Zoological Park is located in the densely populated area of ​​Hyderabad. A few days ago, the government had talked about spreading the virus through the air. In such a situation, this virus can also reach the zoo through nearby people. Earlier in April 2020, 8 tigers and lions were found corona positive in the Bronx Zoo in New York, USA. This was followed by dog ​​and cat infection in Hong Kong.

Strange coincidence: This is the first time in IPL history that such charisma has...