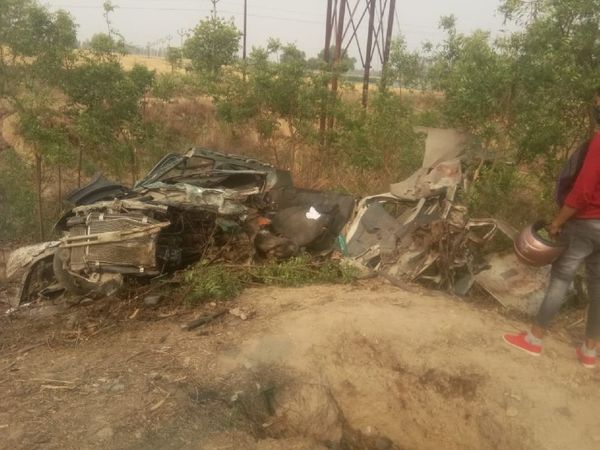 5 people died in a road accident in Shahjahanpur.

In Shahjahanpur, Uttar Pradesh, 5 people who died in search of oxygen died in an accident. Among the dead is the woman, for whom all had gone out to arrange oxygen. One person has been seriously injured in the accident, which is undergoing treatment. Police have removed the dead bodies in the car and sent them for postmort.

Police Inspector Harpal Singh Balian said that all are residents of Radhaula village of Nigohi block of Shahjahanpur. Ramnaresh, who lives in the Radhola area, has a shop for groceries. His wife Jamukadevi was having trouble breathing on Sunday. Ramnaresh went to several hospitals in Shahjahanpur, but refused to admit his wife as a Kovid negative. Family members took him to Bareilly on Monday after he had symptoms of corona and trouble breathing. Here also hospitals refused to admit, saying that if it had been referred, they would have admitted.

No one admitted from Shahjahanpur to Bareilly
Even after wandering in the hospitals of Bareilly, when oxygen could not be arranged, Ramnaresh started returning to Shahjahanpur with his wife. They were also engaged in trying to arrange oxygen cylinders. His car collided with a tree near Banthra village on Shahjahanpur highway here. There was also Ruhelkhand Medical College nearby. Ramgoolam has been removed from the car and admitted there.

288 patients died in 24 hours
After the discharge of 38,687 patients in 24 hours in Uttar Pradesh, 2 lakh 95 thousand 752 active patients are left in the state. There are 30 thousand 857 new cases in the state and 288 people have died. According to Additional Chief Secretary Amit Mohan, 2 lakh 29 thousand 440 samples have been investigated in the state on Monday.

Immigrants with Temporary Status Have Grown Deep Roots in US