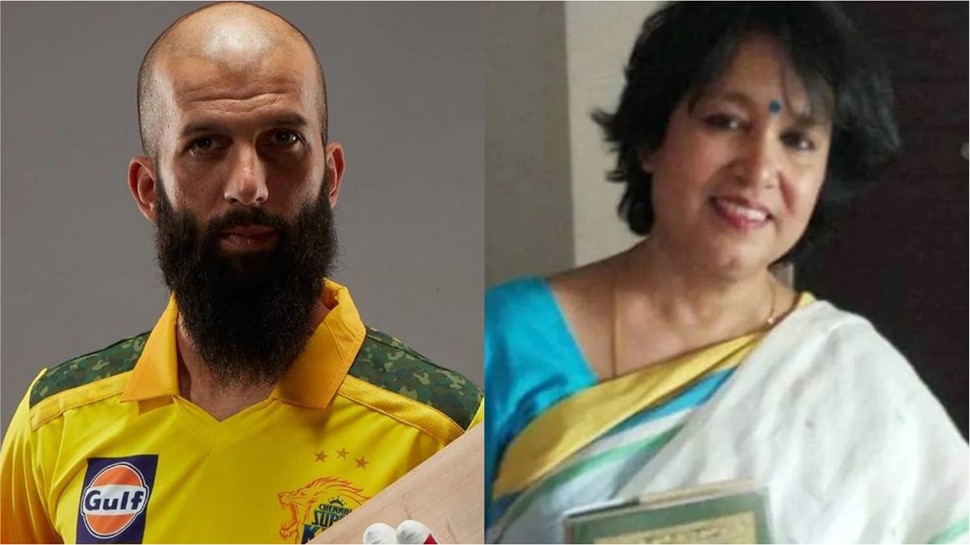 new Delhi: Bangladesh writer Taslima Nasreen has given a controversial statement about England’s cricketer Moin Ali. On Taslima Nasreen’s Moin Ali, a big controversy arose due to such a comment and the fans on Twitter have lashed her fiercely.

Bangladesh writer Taslima Nasreen wrote on Twitter, “If Moin Ali had not been playing cricket, he would have gone to Syria and joined ISIS.” Let us tell you that Taslima Nasreen said this because recently Moin Ali had demanded to remove the people of beer on the jerseys of Chennai Super Kings.

If Moeen Ali were not stuck with cricket, he would have gone to Syria to join ISIS.

A practising Muslim is a terrorist? Don’t do what the world does, Ma’am. Many of us don’t like organised religion. However, to call an individual a terrorist coz he chooses to express his faith is just not done. He didn’t force others to go his way. He just chose not to conform.

Just because he has beard and happen to be of Pakistani origin?

But yes, also tagging @ Eoin16 @ benstokes38 @jbairstow21 @josbuttler @KP24 @MichaelVaughan @StuartBroad8 @ECB_cricket @JofraArcher and @IPL to stand by Moeen Ali who is being targeted & labeled a terrorist for his religious beliefs.

On what basis do you make this claim or is it just your observation ?

@IchbinUjjaini
Prejudiced to core…
Plz come out of this hate there are 99.99% Muslims living with love & empathy around the world.

Please tell that Moin Ali was bought by Chennai in 2021 auction for 7 crores. Earlier he was part of RCB. Moin Ali will be seen playing for Chennai Super Kings in the 14th season of IPL.

China Buys More Iranian and Venezuelan Oil, in a Test for Biden

Gujarat: Corona explosion at IIM Ahmedabad and IIT Gandhinagar, 65 people including students and...