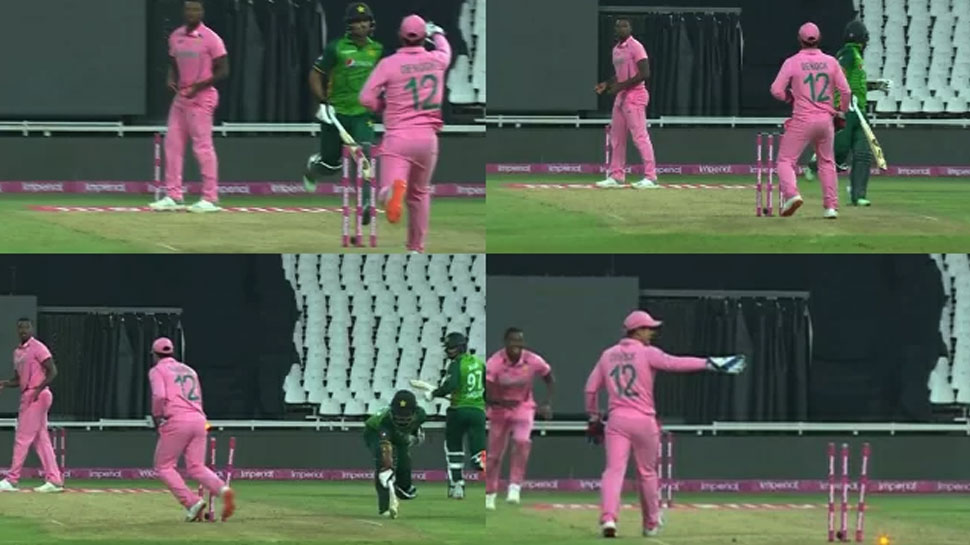 new Delhi: In the second ODI of the series played in South Africa and Pakistan (SA vs PAK) in Johannesburg, the Proteas team has won. Pakistan team lost 17 runs in a thrilling match. The hosts scored 341 runs after losing 6 wickets in 50 overs, in response, the guest team was able to score 324 runs after losing 9 wickets.

Even though Pakistan lost in this match, but the opener of this team, Fakhar Zaman, scored a magnificent 193 runs in 155 balls. During this, he hit 18 fours and 10 sixes. He was awarded the ‘Man of the Match Award’ for his outstanding batting.

“It feels great but it would have been better if we had won.”

Fakhar Zaman quickly completed the first run on the first ball of the last over. When he ran for another run, wicketkeeper Quinton de Kock pointed at Non-Strucker Ind, distracting Fakhar. By then, Aiden Markram hit the ball on the wicket.

The Kock Pro Version Of Sanga.

Fakhar Zaman missed out on 7 runs by scoring a double century with this quintessence of Quinton de Kock. Cricket fans did not like this method of Dickock and people have fiercely expressed anger on Twitter. It is being called against the spirit of the game.

Unfair play and disrespect play from @ QuinnyDeKock69 .. poor spirit from Quinton de kock. Disrespect … 5 runs penalty not given when bowl hit Buyuma’s hat and then this act is absolutely against the rules. Pak management need to protest on this pic.twitter.com/PK3nAgyxB9

It’s unfair for any fielder wilfully to attempt, by word or action, to distract, deceive or obstruct either batsman after striker’s received the ball. If umpires deem an attempt to deceive has taken place, they inform captains & award 5 penalty runs to batting side pic.twitter.com/9ajhMso93n

No Quinton de Kock, you cannot be proud of that. Not at all.

The smile deceivers have on their faces is so evil. Karma will take good care of Quinton de Kock. The #FakharZaman‘s batting today would be written in golden words in history! pic.twitter.com/NWDSC5wiLA

Quinton de Kock was cheeky with that Fakhar Zaman run out. But it is interesting that the umps didn’t see it as a fake fielding. It will be an interesting debate.

Was this run out by @ QuinnyDeKock69 against the spirit of the game?
I’d leave it for you guys to decide. #PAKvSA