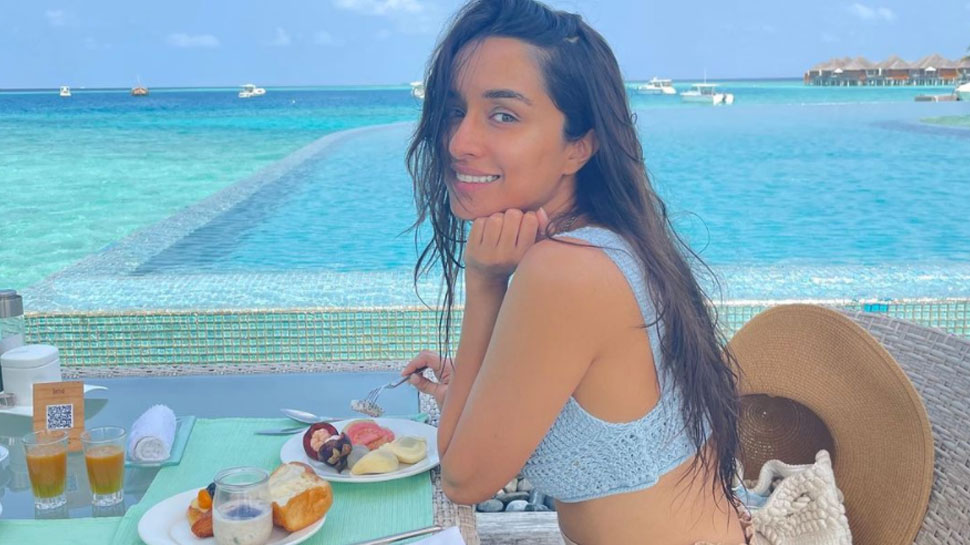 New Delhi: Bollywood’s famous actress Shraddha Kapoor has been in the news since the announcement of her upcoming film. She is going to play double role in ‘Chaalbaaz In London’. Meanwhile, Shraddha Kapoor has shared pictures of her Maldives vacation. Which is hurting the heart of his fans.

Cute reverence between the blue sky and the sea

Shraddha Kapoor is spending time in the Maldives these days taking time off from her work. Meanwhile, she is also sharing some glimpses of her Maldives trip on social media with her fans. On Wednesday afternoon, he caught the attention of people by sharing a picture while having breakfast on the beach. See this photo …

In this picture, Shraddha Kapoor is seen enjoying breakfast at the edge of the infinity pool. She looks very beautiful in blue short top and skin color trousers in open soaked hair.

Sharing the photo, he wrote in the caption, ‘Breakfast for Soul …’ This photo has been viewed more than 14 lakh times in an hour.

Shraddha Kapoor will be seen in these films

Talking about the workfront, Shraddha Kapoor will soon be seen playing a double role in ‘Chaalbaaz In London’. This will be the first time Shraddha will play a double role. After the announcement of the new project of the actress, her fans are quite excited. Apart from this, she will also be seen in the role of a wishful serpent in Nikhil Dwivedi’s ‘Naagin’. Apart from this, he is also in the headlines for Dinesh Vijan’s horror comedy ‘Stree 2’.

Corona in Chhattisgarh: For the first time in a day, more than 5 thousand...

Firing in Texas state of America, one person killed, 5 injured