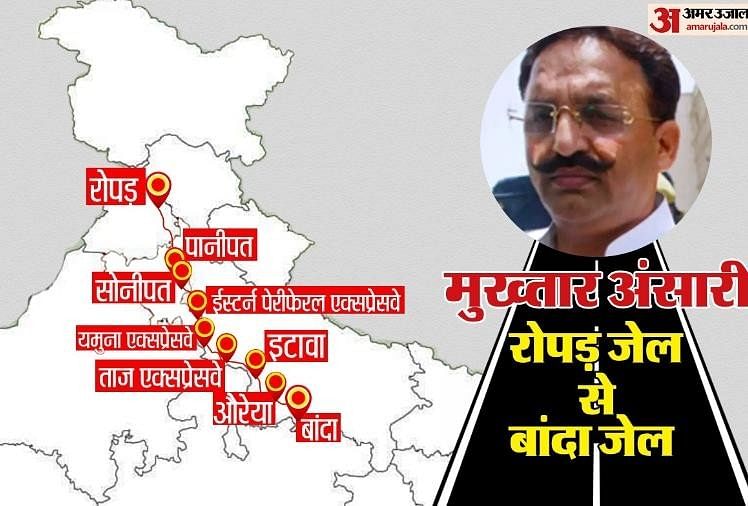 UP police has returned for nine times

Medical Board of Ropar Jail Administration had told Mukhtar Ansari many serious diseases including sugar, depression (depression), slip disc, heart disease. By citing this, the Punjab government has been returned to the UP police nine times so far.

According to the police, Mukhtar Ansari is being taken to Via Banud UP.

Ansari handed over to UP Police

Mukhtar Ansari is placed in an ambulance. Gate changed at the last moment, taken out of number 2. After this, Ansari’s Banda Yatra started.

At the last moment, the location of Mukhtar was taken out.

The paperwork is in the final stages. Punjab Police personnel are taking pictures of vehicles of UP Police.

The UP police has been inside the jail premises for over two hours. Ansari’s shifting is taking time due to the time taken in paperwork. According to sources, now the paperwork is in the final stages.

Alert from Ropar to Banda

Punjab Police officials said that under Mukhtar Ansari’s return to UP, all the districts en route from Ropar to Banda have been alerted.

Punjab police will be with only Punjab border

All UP Police personnel are equipped with modern weapons.

A team of about 100 policemen from UP has come to Punjab to take Ansari from Ropar to Banda Jail. All jawans are equipped with modern weapons and bulletproof jackets.

SSP Ropar Akhil Chaudhary has reached Ropar Jail. They are taking stock of security before Ansari’s shifting. After talking to the police personnel, he left from the spot.

Mukhtar’s henchmen have come in 12 vehicles

According to information received from the CIA, his henchmen have already left Ropar before Mukhtar’s departure. According to sources, in addition to the police vehicles, 12 vehicles of Ansari’s henchmen also came to Ropar.

Police deployed at both gates of Ropar jail

Police has been deployed at both the gates of Ropar Jail. UP police vehicles entered the jail premises an hour ago. Paperwork may take longer.

All the items needed are being kept in an ambulance

All the items needed along the way are being kept in the ambulance carrying Ansari. Mukhtar had expressed some desire to the police. It also includes sugar free juice.

The convoy will leave from NH 44

The route that took Mukhtar Ansari to Banda Jail included National Highway 44. There are more than nine highways on this route.

Vaccination of people aged 18+: Registration will start on the Co-Win portal from April...