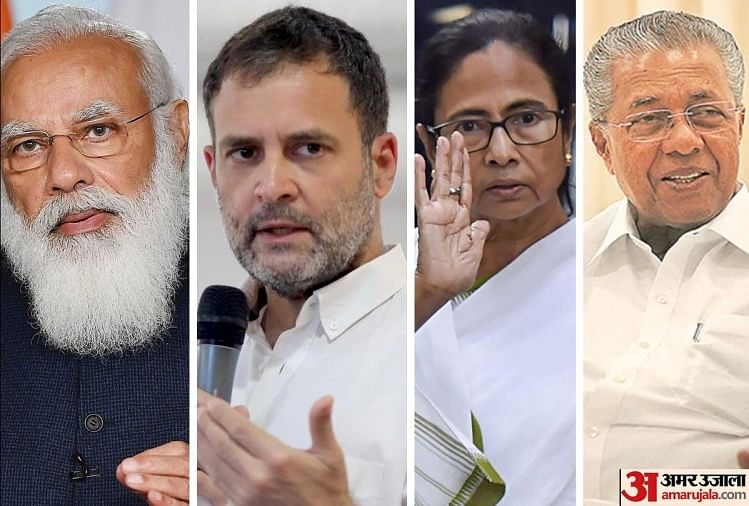 Bengal Election Result: Where in Bengal?

The counting of votes is going on in Bengal and initial trends are pointing to a tough fight between the BJP and the Trinamool Congress. Sayanshi Ghosh of Trinamool from Asansol, Swapan Das Gupta is leading from BJP from Tarakeswar. At the same time, Bharati Ghosh of BJP is leading from Babul Supriyo Debra seat of BJP from Tollygunge seat. Suvendu officials of BJP are leading from Nandigram seat. Here he faces Chief Minister Mamata Banerjee.

The Left seems to be getting a majority in the early trends in Kerala. The Left is currently ahead in 77 seats and the Congress in 60 seats. BJP is leading in only one seat.

According to early trends in Bengal, the Trinamool Congress was leading in 62 seats and the BJP in 55 seats. The Congress was ahead in three seats. At the same time, in Assam, NDA 15 and UPA are leading in 10 seats. The trend of one seat is seen in the account of the other. The AIADMK has led in 14 seats in Tamil Nadu and the DMK in 24 seats. Candidates from other parties are leading in six seats. In Kerala, LDF 71 and UDF are ahead in 60 seats. NDA is leading in only one seat here. NDA is ahead in five and Congress four seats in Puducherry.

Suvendu officer ahead in Nandigram, Bengal

The initial trends of Nandigram, Bengal’s most talked about assembly seat, have also come to light. According to this, BJP leader Suvendu Adhikari is leading ahead of Trinamool Chief and Chief Minister Mamata Banerjee.

A close fight between BJP and Trinamool

Voting was held in 29 phases in West Bengal from March 27 to April 29 in eight phases. Voting was postponed in Shamsherganj and Jangipur seats in Murshidabad district due to the death of some candidates. Voting on these two seats will now be held on May 16 and counting of votes will take place on May 19. The exit poll predicts a tough fight between the ruling Trinamool Congress and the BJP in the elections held in eight phases of the 294-member assembly. According to the trends so far, Trinamool is leading in 53 seats in the state while NDA is leading in 49 seats. Apart from this, Congress is leading in two seats.

Lead is on the left in Kerala.

In the initial trends in Kerala, the Left seems to be getting a big lead. Here the Left 55 and Congress are leading in 38 seats. Apart from this, the trend of one seat is seen in the account of the other.

A tough fight between BJP and Trinamool in Bengal

BJP ahead in Assam

Statistics are changing rapidly in Bengal’s initial trend. NDA is now ahead in 33 seats while TMC is leading in 29 seats. Apart from this, the CPI (M) is also leading in one seat. At the same time, in Assam, NDA 10 and UPA were leading in two seats. Please tell that postal ballots are being counted now. The counting of EVM votes has not started yet.

Electoral trends have also started coming up with the counting of votes. Early trends in counting are seen as Trinamool in Bengal and Left in Kerala. In West Bengal, the Trinamool Congress is currently leading in 15 seats and the BJP in 14 seats. In Assam, NDA was leading in five and UPA in two seats. At the same time, in Kerala, LDF was leading in 25 and UDF 18 seats.

Congress will not be involved in election discussion on TV

The Congress has decided that it will not participate in the televised election debate on Sunday, when the results of the five state assembly elections will be out. Party’s chief spokesperson Randeep Surjewala had said on Saturday that party spokespersons would not participate in the televised discussion after the election results came in the wake of Corona’s grave situation in the country.

Counting of votes is also being done here

In addition to the four states and one union territory, counting of by-elections for the parliamentary seats in Andhra Pradesh (Tirupati), Karnataka (Belgaum), Kerala (Malappuram) and Tamil Nadu (Kanyakumari) is also being counted. Along with this, counting of votes is also being done for the assembly by-elections in 10 states.

The counting of votes for the 822 assembly seats in the four states of West Bengal, Tamil Nadu, Assam, Kerala and Union Territory of Puducherry has started at 8 am.

UP: A car filled with baraties collides with a truck in Maharajganj, four killed, four injured

2-DG: Corona’s medicine is given by three DRDO scientists, know about them

Coronavirus News: If corona infection is mild, then the impact of the virus on...