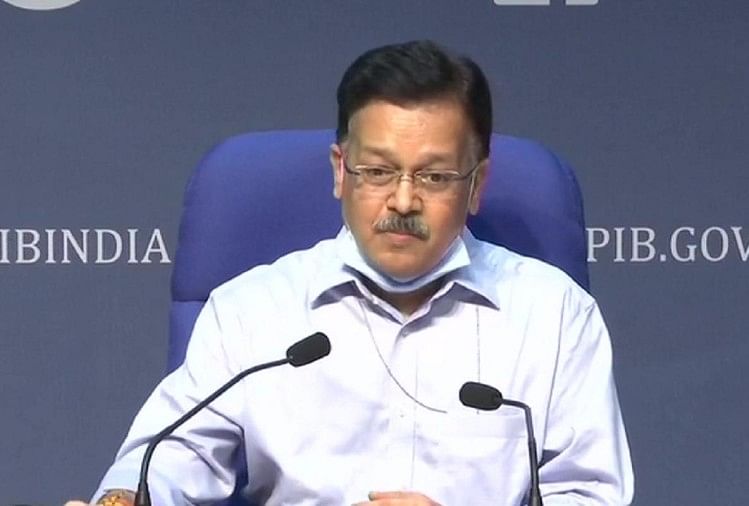 The situation in Maharashtra, Punjab and Chhattisgarh is most worrisome

Health Secretary Rajesh Bhushan said that the situation in Maharashtra, Punjab and Chhattisgarh remains the most worrying in terms of daily overdose and death data of Kovid-19.

10 districts are the most affected in four states

Health Secretary Rajesh Bhushan said that the fortress of Chhattisgarh was also included in the 10 worst-hit districts of Kovid-19 in the country; Other districts include seven in Maharashtra, one in Karnataka and Delhi.

Health Secretary Rajesh Bhushan said that 43 lakh doses of vaccine were applied in the country yesterday (Monday), due to which we have put 8 crore 31 lakh doses till today (Tuesday) morning.

Health Secretary Rajesh Bhushan has said that the weekly positivity rate in Maharashtra was reduced to 6% in February. Now it has increased to 24 per cent, which is a matter of concern.

Highest cases and deaths in Maharashtra

92 percent patients in the country are cured: Union Health Secretary

Union Health Secretary Rajesh Bhushan said on Tuesday that 92 per cent of the total Kovid cases in the country have been recovered. While 1.3 per cent people have died and around 6 per cent new Kovid cases have been reported.

Review meeting on the condition of Corona in Bihar

Bihar Health Minister Mangal Pandey attended a review meeting on the condition of Corona in the state. He gave information about this by tweeting it himself. He said that he participated in a virtual meeting with all the District Magistrates and Reserve Superintendents under the chairmanship of Honorable Chief Minister Nitish Kumar in the state.

Honorable Chief Minister ItNitishKumar Under the chairmanship of JI, he participated in a virtual meeting with all the District Magistrates and Reserve Superintendents about the preparation of Corona in the state. pic.twitter.com/GGNI9awwIs

Indore: More than 250 people who did not wear masks were jailed

More than 250 people, who have avoided wearing masks in public places, have been in jail in the last five days, despite the increasing outbreak of Kovid-19 in Indore, Madhya Pradesh. A top officer of the jail department gave this information on Tuesday.

To prevent air circulation of Kovid-19 in a room, masks and better ventilation system are more important than physical distance. This has been claimed in a new study. In research published in the journal Physics of Fluids, researchers have designed a classroom computer model with students and a teacher. Researchers then prepared a sample in relation to air flow and the spread of disease and measured the risk of infection from the air. The model of the class was 709 square feet with a nine foot high ceiling. It was similar to a smaller sized class. According to the researchers, by applying the mask, the risk of diffusion does not decrease with increasing physical distance, which emphasizes how much the mask needs to be made to increase capacity at schools or other locations.

Brihanmumbai Municipal Corporation bans entry of people into their offices

The Brihanmumbai Municipal Corporation (BMC) has banned entry of people into its headquarters and other offices in the city in view of the rapid rise in the case of Kovid-19. As per the circular issued, no other person will be allowed to enter the BMC offices except the people from the people, those coming from urgent work or attending the pre-scheduled meetings.

Gujarat High Court points out that COVID19 cases in the State are increasing, directs the State govt to take a decision on weekend curfew. HC observed that there is a need for lockdown in the State.

Night curfew imposed in Delhi from 10 pm to 5 am with immediate effect till 30th April, in the wake of #COVID19 situation: Delhi Government pic.twitter.com/V3WufATG77

Allow people older than 18 to get vaccinated – IMA

The Indian Medical Association has written a letter to Prime Minister Narendra Modi and appealed to increase the speed of the vaccination drive with immediate effect. Apart from this, the IMA has said that people above the age of 18 should be allowed to apply the vaccine.

The administration has tightened further in view of the increasing cases of corona in the state of Maharashtra. In this connection, it has now been decided to close the Shirdi Sai Temple. The Shirdi Sai temple will be closed from eight o’clock tonight until further orders. Apart from this, Prasadalaya and Bhakta Niwas will also be closed. This decision has been taken by the temple administration following the Maharashtra government’s decision of partial lockdown.

Assembly elections: Bumper voting in five states including Bengal, know where the turnout was