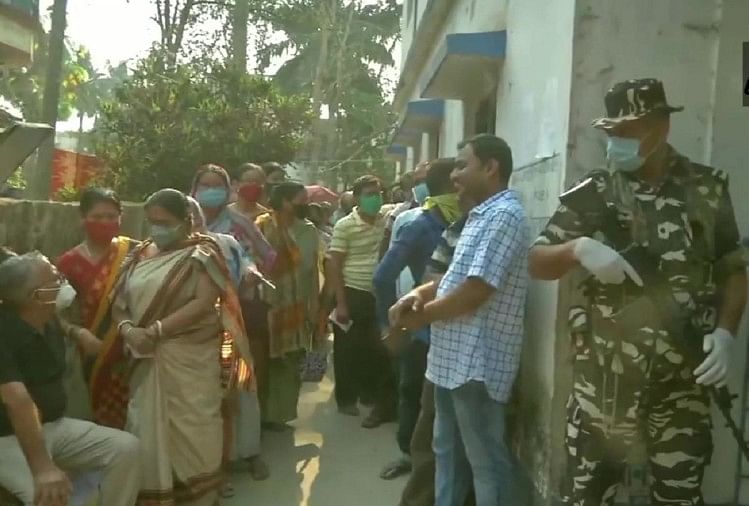 
At the Diamond Harbor Assembly in South 24 Parganas district of Bengal, booth no-54, 54A, TMC has alleged that CRPF is not allowing voters to enter the booth without voter slip.

The Election Commission swung into action after the EVM was found at TMC leader’s house in Howrah, West Bengal. The sector officer was suspended in this case.

Sector Officer has been suspended. It was a reserved EVM that has been removed from the election process. Severe action will be taken against all involved: Election Commission of India (ECI)

EVMs and VVPATs were found at the residence of a TMC leader in Uluberia, West Bengal pic.twitter.com/IBFwmDSXeY

Udayanidhi Stalin, son of DMK chief MK Stalin, voted. He appealed to more and more people to vote. Let us know that Udayanidhi is tapping the electoral ground from Chepauk assembly constituency.

#TamilNaduElections2021 | I appeal to all to come out and cast their votes, says DMK’s Udhayanidhi Stalin who is contesting from the Chepauk assembly constituency pic.twitter.com/wRNAF3Frla

DMK chief MK Stalin cast his vote at the polling station in Teenapet.

He was accompanied by his wife Durga and son Udhayanidhi Stalin#TamilNaduElections2021 pic.twitter.com/ilKnKyS9u1

A lot of excitement about voting in Kerala

There is a lot of enthusiasm among the supporters of political parties in Kerala for voting. People are voting loudly. During this time a supporter of the LDF cast his vote at a polling station in Pinarai, Kannur.

An LDF supporter arrives at a polling booth in Pinarayi in Kannur to cast his vote. CM Pinarayi Vijayan will also cast his vote at the booth.#KeralaElections2021 pic.twitter.com/4JyEqNdA8O

Kerala Chief Minister Pinarayi Vijayan reached the polling station at Pinarai to cast his vote and cast his vote.

In Puducherry, Congress President N Rangaswamy visited the Appa Pathiam Swamy temple and offered prayers before the vote. Let us know that he is trying his luck in the electoral field.

Before the voting in Bengal, once again murder is being reported. Please tell that TMC worker was killed even before the second phase of voting. At the same time, in Nandigram, a BJP worker committed suicide by hanging himself.

PM Modi appealed to the people

Voting is going on today in all the five states of the country. During this, PM Modi tweeted. He appealed to more and more people to vote.

Elections are taking place in Assam, Kerala, Puducherry, Tamil Nadu and West Bengal. I request the people in these places to vote in record numbers, particularly the young voters.

E Sreedharan, popularly known as Metro Man, voted. He said that the BJP will give unprecedented performance this time. There is no doubt about it. I will win from Palakkad constituency with an overwhelming majority. There has been a big difference in the BJP’s image with my arrival.

BJP will have an impressive show this time, there’s no doubt about it. I will win from the Palakkad constituency with a big margin. My entry into BJP has given a different image to the party: ‘Metro Man’ E Sreedharan, BJP candidate#KeralaElections pic.twitter.com/ZMTsChpBuE

Information has been received about the EVM meeting at TMC leader’s house in Howrah, West Bengal. This allegation has been made by the BJP leader. Also, the matter has been reported to the Election Commission.

Voting for the final phase of polling in Assam and third phase in West Bengal, begins. Voting also begins for the single-phase polling in Kerala, Puducherry and Tamil Nadu.#AssemblyElections2021 pic.twitter.com/zSMsHsigNa

Metro man E Sreedharan cast his vote at the Ponnani polling booth. Sreedharan is contesting on a BJP ticket.

Britain: Corona cases rise, additional flights from India will not be approved at Heathrow Airport

#LadengeCoronaSe: Registration for those above 18 years of age will start from tomorrow, May 1

Karishma Kapoor’s look on social media, you will also be surprised to see the...

Mother … That’s why the mother is: 5-year-old innocent dropped in the canal from...